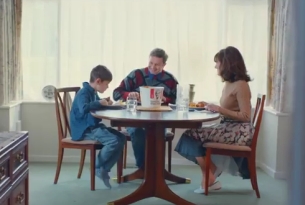 To mark an historic 50 years in the UK, KFC is kicking off a year long multi channel campaign to celebrate both its place in British family life and its original tastes. Created by BBH London, the campaign will kick off a massive year for the KFC business.

The 60 second TVC ‘Families’, which launches on Monday 9th February, is a powerful and emotive narrative showing how the ‘hands on’ experience of sharing a bucket can help breakdown barriers. The family featured is a foster family, chosen to reflect the diversity of families in Britain today.

This is supported by #50YearsOfKFC, a fan based participative and fully integrated campaign to celebrate KFC’s two key signature tastes – Original Recipe and Zinger. Also launching on Monday 9th February across all channels, it will kick off a search to reward KFC’s most passionate fans by inviting them to share via Twitter and Facebook what they would do for the great taste of KFC. Participants will compete for the ultimate prize – KFC once a month for the next 50 years to share with their friends and family.

David Timm, Vice President of Marketing at KFC, said: “This is a landmark year for KFC and gives us the opportunity to remind our fans why they love KFC and to also hopefully bring some new fans to the Colonel’s great tasting chicken. We are extremely proud of #50YearsOfKFC and Families, which show the balance we’re trying to achieve through big, emotional brand campaigns that strike a closer connection with consumers, and celebrating our food, flavour and ingredients. We want to hero our chicken that’s freshly prepared in store every day – the Original and Zinger taste ads celebrate that. And family and sharing sit at the centre of our 50th campaigns.