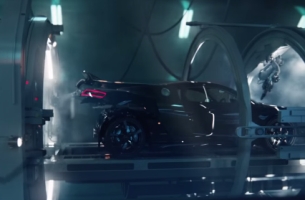 New spectacular film launches to support the introduction of the hottest hatch from Audi and its most iconic performance car. Both the all-new RS 3 Sportback and R8 feature in a breathtaking cinema commercial that re-writes the rule book of car advertising while showcasing the brand’s high performance range known as Audi Sport.

Staying true to the Audi ‘Vorsprung durch Technik’ values, the 110-second film, Birth, is a progressive and technological masterpiece, which captivates the audience with the R8 giving birth to the RS 3 Sportback, the most recent member of the RS family.

Remarkably, the ad was created entirely in CG and no actual cars appear in the film as both were created entirely from CAD data, a first for Audi and a true feat of artistry from a production team assisted by top Hollywood director, Rupert Sanders, who is best known for his work on the 2012 box-office hit - Snow White and the Huntsman.

Nick Ratcliffe, Head of Marketing for Audi UK, says: “The metaphor of the Audi R8 literally giving birth is visually striking but the comparison is also highly appropriate.

“All of the characteristics synonymous with the R8 can be seen in the stunning new RS 3 Sportback and it is this DNA that makes Audi Sport so special.

”The ad is a simple idea that has been executed brilliantly to perfectly capture the communication objectives for the RS 3.”

The film was created by BBH London and directed by Andrew Proctor out of Mill+, who worked with a team of VFX artists across the Mill+ London and Los Angeles studios to build the fully CG cars and environments using CAD data from Audi and photography of real vehicles.

Ian Heartfield, Creative Director at BBH commented on the challenge: “The Audi R8 has become a legend, synonymous with killer performance, state of the art design and a distinctive soundtrack.  The task was to find a confident, bold and exciting way to tell the story that these legendary attributes live-on in all Audi Sport models.”

The film will run in cinemas and online from 29 April 2015.  The media was planned and bought by Mediacom.

Mill+ Director Andrew Proctor commented on the process, “As soon as I got this script it really resonated with me and I immediately immersed myself in the design of the environment and story. My visual effects knowledge allows me to create for myself and gives me a direct channel from my mind to the screen, so I started by creating a futuristic hybrid of an engineering plant and medical bay for the R8 to sit in.

It's hard not to make both cars look amazing. They are both incredibly well designed with an iconic shape. The aim was to create an environment, which looked like a slick machine, making the room part of the story as though almost nursing the car.”