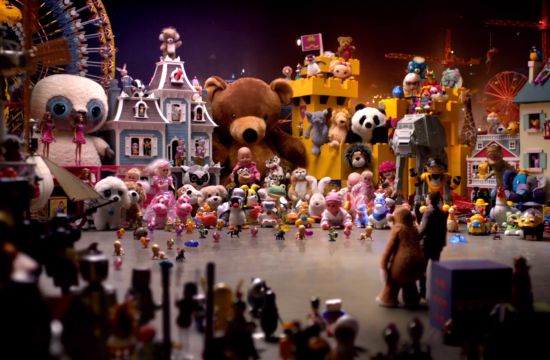 Barclaycard is launching its biggest integrated campaign on the 10th November featuring a 90" TVC, innovative use of technology and a partnership with Great Ormond Street Hospital Children’s Charity.

The campaign is an exciting big step for the brand as it is the first time that augmented reality (AR) and Shazam have been used in conjunction with one of its campaigns.


Celebrating how Barclaycard makes it easy to pay for things, the campaign features a ‘Dad’ struggling to pick the right toy for his son at Christmas. The ‘Dad’ is helped by a toy named ‘Mr. B’, voiced by James Corden, in his magical toyshop world, where hundreds of Toys are brought to life to try and impress Dad.

The integrated aspect of the creative takes the campaign one-step further encouraging consumers to interact with the campaign beyond the TV. Consumers can interact with the TVC by opening the Shazam app on their smart phone and tagging the advert. Every time someone wins a prize through the advert using Shazam, Barclaycard will donate £5 to Great Ormond Street Hospital Children’s Charity, this will contribute towards a minimum of £15,000 being raised to support the accommodation for parents with children being treated at the hospital.

The creative behind the campaign is ‘Making paying easier’, showcasing Barclaycard’s contactless and mobile payment solutions, and was developed by advertising agency, BBH. The AR and Shazam elements were produced by digital agency, Dare. The campaign is also supported by Maxus for media and Mission for PR.

The production process involved Gorgeous, Passion Pictures, Framestore and director, Chris Palmer, who used a combination of production techniques to bring the hundreds of toys to life. All the toys used in the shoot were donated to charities including, Women’s Aid, The Children’s Society and the Kid’s Company. The advert also features a cameo from Joanna Lumley as the voice of one of the characters.


Edited by Johnnie Scarlett, the Flame team led by Jonathan Hairman, composited layer upon layer of elements, carefully composing each shot. Once this was achieved, we then set about the task of making Mr B talk. Using a second puppeteered head and a crafted script, Mr B’s new head was tracked, relit and fine-tuned into each shot to bring him to life.
Every viewing of the film will reveal another level of the huge detail all parties went to, each eye and mouth movement (even on out of focus characters in the background) has all been animated, and timed to frame accuracy. The project was a huge undertaking and involved a vast team of compositors, trackers and producers, but the results – all three 90, 60 and 40 second versions – are fantastic and well worth the hard work.

The AR game, Toys Unleashed is a free download available from the Apple App store, which features characters from the campaign. From the 16th November consumers can play with a trio of characters from the advert that seemingly spring into life in the palm of their hand.

Gary Twelvetree, Global Brand Director at Barclaycard, said: “There can be nothing more daunting for a young father than walking into a toyshop at Christmas time trying to find that perfect gift and we wanted to bring that to life in a really engaging way. We’re really excited about the innovative use of the AR game and Shazam in the new campaign.”

The campaign launches for the first time on Saturday, 10th November 2012 on ITV1 during X Factor. On Sunday 11th November, the advert will be aired during the X Factor Sunday results show and people will be able to use Shazam on their phones to enter the competition.

To see the campaign go to http://www.facebook.com/barclaycard