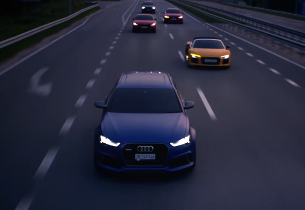 The car marque with the four rings launches a new ad to celebrate the Audi Sport range and the important role its remarkably successful, 16-year engagement in the world-famous 24 Hours of Le Mans race has played in the brand’s evolution. The campaign breaks on TV on Friday 4 November 2016.

‘Going Home’, created by BBH, carries the tagline ‘Audi Sport. Born on the track, built for the road.’

It depicts Audi RS models, including the new TT RS Coupé and R8 Spyder, making an epic journey to the Circuit des 24 Heures du Mans, where so much of the knowledge and expertise behind these spectacular high performance models has been gained during the development of generations of thoroughbred Audi racing cars.

The film also features the Audi RS 6, RS 7, RS Q3 and the Le Mans winning R18. The cars take to the circuit in formation, accompanied by an acoustic rendition of the Simon and Garfunkel classic,  2/3 ‘Homeward Bound’. The track was produced by David Kosten, the Mercury Prize nominated producer, and performed by up and coming artist, Gina Kushka. The ad is a tribute to a period of the Le Mans race, which will go down in history as the Audi Era. Between 1999 and 2016, the German manufacturer finished on the podium 18 times in 18 starts and won the race on 13 occasions – a period of unprecedented success.

During that era, Audi scored wins using TFSI petrol and diesel engines and more recently, hybrid power – a series of pioneering achievements that made history at Le Mans. Sarah Cox, Interim Head of Marketing of Audi UK, explains: "This evocative film is a fitting culmination of a long and successful relationship between Audi Sport and Le Mans. In the true spirit of Vorsprung durch Technik, our 13 victories in this famous endurance race inspired, and will continue to inspire, the development of Audi road cars."

Ian Heartfield, Deputy Executive Creative Director of BBH London, adds: "This is the first time we have been able to make one film with the whole Audi Sport range. Each car is iconic in its own right, so the chance to see all of them together en route to what has been the spiritual home of Audi Sport for so many years, makes for a simple but beautifully compelling film."

The film's director, C D Morrish, says: "We wanted to break the conventions of ads for powerful cars. These RS models are not just performance cars, they are pieces of beauty."

The launch weekend of ‘Going Home’ will see the ad air during the interval of ITV1’s mini-series Tutankhamun. The film will also feature in cinemas nationwide, showing Star Wars and Inferno, in the run up to 2017.

The Audi association with Le Mans ends with the conclusion of the 2016 season, as the brand turns its focus to Formula E.