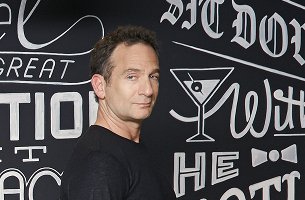 In recent years BBDO Worldwide CCO David Lubars has presided over numerous juries at the Cannes Lions. But never was he quite as excited as this year, when he headed up the 2015 Branded Content & Entertainment category. LBB’s Addison Capper chatted with him to find out why.

LBB> How did you prepare yourself for your stint in the jury room at Cannes?

DL> Ha, Cannes had been preparing the jury members and me well - for the last month they’ve had us screening hours of entries before our arrival.

LBB> What words of advice would did you give to your jury?

DL> Look for work that stuns you, delights you, makes you jealous. And work that’s been done for legitimate clients.

LBB> The transcendent “big” ideas are relatively easy enough to spot, but some work is smart in a more nuanced way, for example work that plays on the subtleties of a particular culture (the callings of writing copy in Chinese might be different to writing in English or French, for example).  When you’re leading a jury, how do you give space to these ideas in the jury room?

DL> It doesn’t matter if Chinese copy doesn’t make sense to French-speaking ears, not an issue. We’re looking for insights that reveal a universal humanity and truth. Those insights reveal themselves nakedly no matter how nuanced a cultural execution may be.

LBB> Branded content at Cannes is now in its fourth year.  Do you feel that the category is still coming into its own?  How has it evolved in that time?

DL> Over the past eight years, I’ve had the honor of presiding over Titanium, Film and Press juries. Loved doing those. But I’m especially excited about Branded Content and Entertainment because I believe it’s now transcended being a category – it’s the direction in which the industry is headed. It’s gone from a nice-to-have campaign extension to a this-is-how-people-look-at-things-every-day-on-their-phones necessity. I look forward to not only judging but learning, too.

LBB> To me, due to the different forms that it can come in, branded content seems like such a hugely broad category to judge – would you agree with that?  How tricky is it to pick out winners amongst such a varied crowd?

DL> Well, it’s like saying there are so many different ways to hit a tennis ball or play the piano. You know if it’s great tennis or piano playing no matter how different the style.

LBB> What do you think were big talking points this year?

DL> I think some of the things happening in media are exciting.  For example, addressable video – where you can hit your exact audience with precision accuracy in a way that was unimaginable before. It’s going to turn things on its head in the best way.