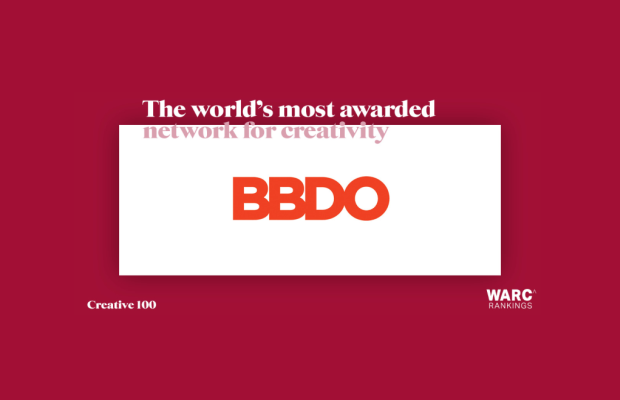 The World Advertising Research Center (WARC) has released the results of its second annual Creative 100, ranking the most creative agencies, networks and campaigns in the world. In 2019 The WARC Creative 100 replaced The Gunn Report as the definitive benchmark for creative success based on results from the most prestigious global and regional industry competitions.

Five BBDO offices were ranked among the world’s top 20 individual agencies, with AMVBBDO ranked #4, Impact BBDO at #5, AlmapBBDO at #13, CHE at #16 and BBDO New York ranked #17. A total of eight BBDO agencies were included in the top 50, contributing to the network’s success.

David Lubars, chief creative officer worldwide and creative chairman BBDO Worldwide, said: "What makes me most proud of topping the WARC Creative 100 for the second year in a row is that it's not just one agency or campaign. It's multiple agencies delivering work for multiple clients across multiple forms and platforms."

David Tiltman, VP content, WARC, said: “Through our rigorous methodology, The WARC Creative 100 provides the ultimate independent global benchmark for the industry, spotlighting the most creative and inspirational marketing ideas from around the world and the companies behind them. We applaud BBDO Worldwide for its achievement of being ranked the world’s most creative agency network.”

BBDO is a part of Omnicom Group which was also ranked #1 Holding Company in the world by WARC this year.

The WARC Creative 100 is one of a series of rankings that will be published by WARC, offering an independent industry benchmark for creativity, media and effectiveness. This year's WARC Creative 100 was compiled from global industry competitions including Cannes Lions, Clio Awards, D&AD, London International Awards and the One Show, along with regional competitions such as Adfest, Dubai Lynx, El Ojo de Iberoamérica, Eurobest, Golden Drum.