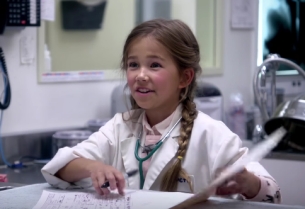 Mattel Inc. today launched a new campaign for its Barbie® brand as part of its broader initiative to empower girls.

The ongoing campaign was created by BBDO San Francisco, in conjunction with BBDO New York, and marks the first work since BBDO was awarded the business earlier this year.

The new online film, entitled “Imagine the Possibilities,” is targeted at parents. It’s about open play, returning the brand to its roots and celebrating young girls’ journeys of self-discovery. The film makes use of hidden cameras to capture people’s reactions as girls play out situations they imagine in real life, such as being a college lecturer, a veterinarian, a soccer coach, a businesswoman and a museum guide. In the end, we see these situations being played out with their Barbie dolls, reminding people how play with Barbie helps inspire imagination and confidence.

“Barbie was originally created to show girls they have choices, a fact that most people have forgotten,” said Matt Miller, Executive Creative Director, BBDO San Francisco. “So we set out to show everyone how girls really play and demonstrate that, when girls play with Barbie, they actually play out the possibilities their futures hold.”

“We know that Barbie has a meaningful place in the lives of girls,” said Evelyn Mazzocco, Senior Vice President and General Manager, Barbie. “We are working together with BBDO to build an emotional connection with parents by reintroducing them to the wonderful benefits of imaginative play and storytelling with Barbie.” She added, “With its storied history of brand building, deep understanding of Barbie and ability to be a collaborative partner, they are the right creative agency.”

John Osborn, President and CEO of BBDO New York said, “This advertising is just the beginning of our ongoing partnership with Barbie. Our goal is to create a movement in support of this iconic brand and help convert parents into brand advocates.”