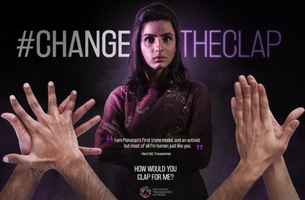 On International Human Rights Day, BBDO and Proximity Pakistan collaborated with Asia Pacific Transgender Network to bring a crucial issue to the forefront with the launch of a campaign called #ChangeTheClap - to raise awareness about the hardships faced by transgender people in Pakistan, help fight transphobia and advocate equal opportunities for them.
The campaign is based on a powerful insight associated with transgender people specifically in the subcontinent: the clap. The transgender clap is distinctly horizontal flat palms striking against and perpendicular to each other, with fingers spread as opposed to the common applause-style, vertical palm & closed fingers strike. The transgender clap is a historical and powerful symbol for trans people but is widely taken out of context and mimicked largely in the subcontinent by the public, to ridicule them.
A Change in the clap asks people to #ChangeTheClap from one of ridicule to one of applause, respect and inclusion.
It demands a change in mind-sets from the society, a change which welcomes the transgender community into the society and aims to provide equal opportunities for them.
Featuring prominent transgender people from Pakistan including model, activist and UN representative Kami Sid, social worker Neeli Rana, motivational speaker Mani AQ and a professional model and engineering student Irha Parishei, the campaign directly challenges the way people perceive transgender people in Pakistan.
Trans stories have also been featured on the APTN’s Facebook page, unveiling their journeys and revealing the diversities of transgender people and how they made a name for themselves, in a world that only excluded them.
view more - Creative