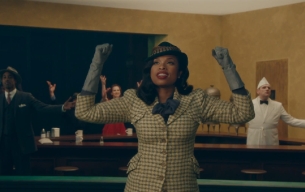 American Family Insurance is evolving its advertising campaign to inspire more people to dream fearlessly. The company is further expanding its role as the brand that inspires, protects and restores dreams, this time with the help of award-winning artist Jennifer Hudson. The emotional ad breaks Feb. 1 during a regional Super Bowl buy.

The ad marks the launch of a bold, new multimedia campaign for the country’s third-largest mutual property/casualty insurance company. The campaign, created by BBDO NY, will initially be seen in 70 markets by more than 33 million Americans in American Family’s operating states. The work marks the third year American Family has advertised regionally in the game. It will subsequently be aired in other high-visibility television programs throughout the year, including regional broadcasts of the Grammy and Academy Awards later in February.

“Jennifer embodies the tenacity and commitment it takes to pursue and achieve a dream,” said Telisa Yancy, marketing vice president at American Family. “We believe her story will inspire others and remind people of the unique role we want to play in our customers’ lives. Insurance is about so much more than the messaging we currently see from other insurance companies. Insuring with our company is truly about empowering our customers to pursue and achieve their dreams, while we protect what they’ve already achieved.”

“I have been pursuing my dreams since I was a child,” said Ms. Hudson, a native of Chicago, where the ad was filmed. “I think this Dream Fearlessly campaign is a wonderful way to celebrate the millions of people who want to achieve their goals, so it was an honor to be part of it.”

The ad is set in a 40s era diner and features Hudson along with a cast of five actual dreamers who are hoping to realize their own ambitions. Set to the music of “O-o-oh Child,” Ms. Hudson and her castmates join together with a powerful voice that encourage viewers to go after what they want. The campaign’s tagline: Insure carefully, Dream fearlessly. The ad was filmed by acclaimed commercial director, Jake Scott.

In addition to television advertising, a robust print, radio and digital effort, all of which ladder up to the hashtag #DreamFearlessly, will support the campaign. The social call-to-action is intended to push viewers to tweet their dreams. A team of professional artists will use chalk typography to illustrate select tweets with the #DreamFearlessly hashtag that are posted during the Super Bowl. American Family will tweet back an image of the finished artwork.

“Our mission is to inspire, protect and restore dreams,” said Yancy. “We take this very seriously and hope that people will walk away from this commercial recognizing that we are committed to be the champion of dreams. We thank Jennifer for helping us deliver this important message.”