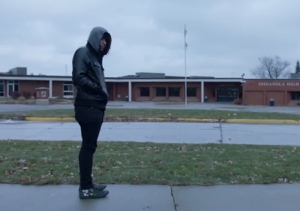 The new documentary, What They Left Behind, chronicles stories of gun violence and aims to shed light on the underlying issues that allow these tragedies to take place in hope that we might better understand how we can be proactive in prevention.  Through these stories, Sandy Hook Promise introduces an entirely new approach to the tragedy of gun violence that engages, and empowers Americans in the prevention of gun violence in our country.

Directed by Tarik Karam and Executive Produced by Stephen Daldry, the Academy Award-nominated Director behind The Reader and Extremely Loud and Incredibly Close, and conceived pro bono by the creative advertising agency BBDO New York, the documentary-short explores the gun-related deaths of three children, the circumstances leading up to the shootings, the heart-wrenching impact on their families, and how these tragedies may have been prevented.

“I was truly honored to work on this project with Sandy Hook Promise,” said film director Tarik Karam. “There is nothing more important than carrying this message to parents, schools and communities across the nation.  We need to come together and acknowledge that gun violence is a real threat that our children face each day, and there are real actions we can collectively take to reduce the occurrence of these tragedies and protect those most vulnerable among us.”

In the film, three vignettes unfold to tell the story of youth affected by gun violence: from a 17–year-old girl who committed suicide with her father’s gun; to an argument among young teenage boys in Iowa that ended in bloodshed; to the Barden family who lost their 7-year-old son in the Sandy Hook Elementary School shooting. Each story underscores a new programmatic element that Sandy Hook Promise is announcing to prevent similar tragedies from occurring.

“This was an extremely difficult film to make as we approach the second year since our sweet, little Daniel was so brutally torn from our family, but we can only hope that somehow by sharing what we have experienced we can help other communities learn how to avoid a similar fate,” said Mark Barden, Advocacy Director of Sandy Hook Promise and father of seven-year-old Daniel, killed in his first-grade classroom.

In addition to What They Left Behind, there is also a companion three-minute video, called Monsters Under the Bed, being released online that powerfully compares and contrasts the fact that parents are better prepared to protect their children from imaginary threats than the real threat of gun violence. This powerful video can be viewed on SandyHookPromise.org as well as on social media channels like Facebook, Tumblr, YouTube, and Twitter.

Sandy Hook Promise is also introducing its tools and programs to help parents and communities protect children from gun violence.  These tools and programs focus on preventative steps to help stop individuals from hurting themselves or others with a firearm.   Sandy Hook Promise provides parents, students, educators and all others involved with youth simple, powerful actions that can be taken today.

The tools and programs to be launched from Sandy Hook Promise will include:

• Know the Signs – educates parents, guardians, caregivers of children and young adults on the early warning signs, symptoms and behaviors of at-risk individuals and how to intervene to help them from hurting themselves or others.

• Say Something - educates youth to tell a responsible adult if they see, hear or read something on social media or elsewhere indicating an individual may be a threat to themselves or others.

• Reach Out - teaches children, teens and young adults how to be socially inclusive by learning the causes and signs of exclusion or isolation and what actions to take to be more connected and inclusive.

• Keep It Safe and Secure – provides and educates parents and communities on how to protect children from gun tragedies through safe storage, modeling responsible gun ownership and teaching children what to do if they see a gun.

• Instill the Skills - provides parents, caregivers and those involved with youth, with the tools to instill social and emotional development skills, such as empathy, compassion, coping and anger management, into children and youth to encourage and create caring and non-violent communities.

The organization is asking parents and communities around the nation to visit SandyHookPromise.org to view the film, share its message with their own families, schools and youth-based organizations and learn more about its prevention tools and programs.

“In the two years since I lost my son, I have been speaking with communities across the country to better understand the causes of gun violence,” said Nicole Hockley, Communications Director for Sandy Hook Promise and mother of six-year-old Dylan killed in his first-grade classroom at Sandy Hook.  “What we have learned is that, as a nation, we can help to prevent tens of thousands of gun deaths, by first learning the warning signs of violent behavior and focusing on community-based programs to help and heal those most at risk.”