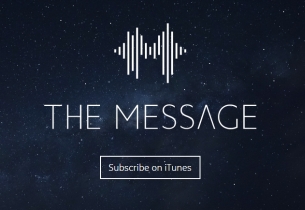 This weekend, GE debuted “The Message,” a science fictional podcast conceived by BBDO New York and co-produced by Panoply and GE Podcast Theater.

Over the course of eight weekly episodes, listeners will be able to get an inside ear on how a top team of cryptologists attempts to decipher, decode and understand an alien message from the 1940’s.  Key to the team’s success is decoding the power of sound waves – something GE has been very much involved with via its ExAblate technology, for example, which is a completely noninvasive acoustic surgery, developed to treat neurological disorders.

In the very first episode that aired last night, we meet our narrator Nicky Tomalin as she joins the team at Cypher, a top team of cryptologists that the government has pinpointed to lead the decryption of The Message. Just as the team agrees to take on the challenge, they learn that The Message may in fact be cursed.

The first episode is now available for download on a custom landing page. You can check it out here

The podcast series will run every Sunday from now through the end of November. Listeners will also be able to go beyond the story and explore extra content, such as Cypher’s website, Nicky Tomalin’s (our narrator) blog…and more.

As you know, GE has been an early adopter of many new social platforms and digital technologies.  And with interest in podcasting on the rise (thanks to the popularity of “Serial”), podcasts, in fact, recently staged their own upfront buying season.  It makes sense that GE is exploring this platform as a way to bring its real science into entertaining fan fiction, and why we think this series would be both timely and of interest to you and your readers.