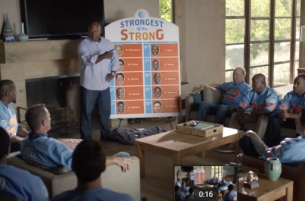 During the 2014 College Football Playoff, AT&T debuted the Legends campaign which featured a number of former Heisman Trophy winners debating about what makes for the strongest college athletes.

The campaign became a fan favourite. So BBDO New York has brought it back... bigger and stronger than ever.

Throughout the college football season, a group of ten legendary gridiron greats will compete in various feats of strength to see who is strong enough to watch the College Football Playoff with Bo Jackson.  Athletes include Jerry Rice, Steve Young, Roger Staubach, Emmitt Smith, Desmond Howard, Doug Flutie and more. They’ll compete to decide who is the strongest armchair quarterback, who has the strongest Tweet to show their school pride, among other challenges. Come December, only three will remain standing to join Bo at his Playoff bash.