Simon is an award-winning composer based in London who's known for using found sounds, sampling, and electronics in his work 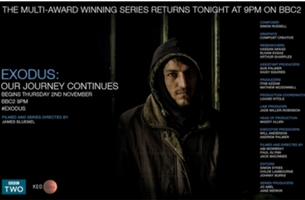 The BBC's 'terrifying, intimate and epic portrait of the Migration crisis', Exodus: Our Journey to Europe, continues for a second series tonight on BBC Two, 'Our Journey Continues'. The show is filmed by those given cameras by the BBC back in 2015, as they smuggle themselves and often loved ones too into Europe. Returning for the second series, the programme is once again scored by composer Simon Russell, an award-winning composer based in London.  He is known for his work using found sounds, sampling, and electronics.

In 2009, Simon scored Havana Marking’s documentary feature, Afghan Star, that went on to claim 2 Sundance awards, The Grierson Award 2009, and a Prix Italia.  The same year, Simon scored From St Peter’s To St Paul’s, that won the RTS Award for Best Arts Documentary.  Most recently, Pussy Riot: A Punk Prayer won a Sundance Award and the Best Documentary prize at the British Independent Film Awards 2013.

Other notable documentary works include last year’s We Are Many (dir. Amir Amirani), about the demonstrations against the Iraq war in 2003, (a score for which Simon collaborated with Alex Baranowski), Smash & Grab (dir. Havana Marking), an innovative documentary about the notorious diamond thieves, the Pink Panthers; Vote Afghanistan! (dir. Martin Herring & Havana Marking), about the country’s first free elections in 2009; 2 series fronted by Waldemar Januzczak: The Dark Ages – An Age Of Light, a 4-part series looking at art and architecture in the Middle Ages, and the 4-part Renaissance Unchained, both for BBC4, and 52 episodes of the animated show Canimals, for Aardman.

In 2016, Simon wrote the music for the remarkable BBC documentary series Exodus: Our Journey To Europe, and the score to a feature documentary for Storyville about the Ashley Madison scandal.