'Seven Worlds, One Planet' premieres on BBC One and iPlayer on Sunday 27th October 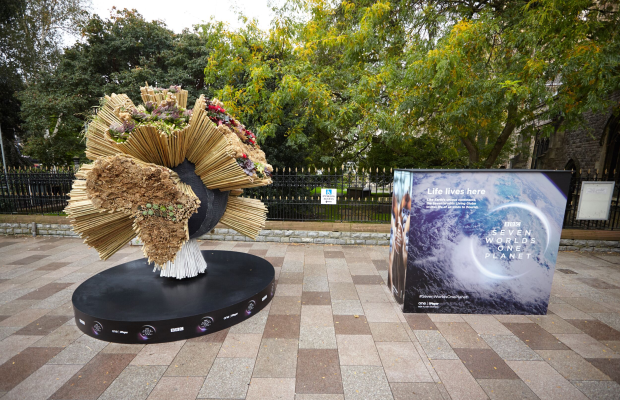 To celebrate the launch of the new natural history series, Sir David Attenborough’s ‘Seven Worlds, One Planet’ on BBC One, the BBC has unveiled a unique wildlife installation designed to be enjoyed by humans and wildlife alike.

The Seven Worlds Living Globe promotes biodiversity and the beauty of the natural world.  It was designed by BBC Creative, with author and presenter Kate Bradbury consulting on the project.

The globe acts as a home for local wildlife which they can use as a refuge from city life.  The construct stands at three-metres wide and reflects each of the seven continents, containing its own bespoke and varied set of habitats. 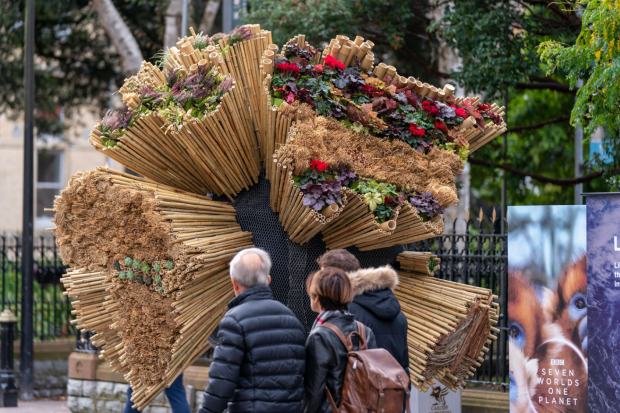 A key message from Seven Worlds, One Planet is the importance of biodiversity on each of earth’s seven continents. So, instead of traditional outdoor advertising for the series, the BBC felt it was more appropriate to use this installation to directly support biodiversity in its immediate area.

Over the next two weeks the Seven Worlds Living Globe will bring biodiversity support to both Cardiff and Manchester city centres, where members of the public can explore the many plants and insect housing features around its earth-like structure.

After this period the globe will be donated to The Eden Project in Cornwall, where it will be installed as a permanent exhibit.

The series Seven Worlds, One Planet, which premieres on BBC One and iPlayer on Sunday 27 October at 6.15pm, reveals the extraordinary wildlife stories and unseen wilderness of our seven unique continents.

You can check out a trailer for the series below:

Filmed over four years, the landmark, seven-part series shows a vast and varying planet but highlights a core message that despite these disparate landscapes we are one planet and need to take better care and responsibility of where we live.

Chris Hooper, Head of Marketing, BBC One said: “We wanted our promotion of this landmark BBC One and iPlayer series to be unique and true to the spirit of the show, so rather than using traditional billboards, we are using our out-of-home campaign to remind audiences of the importance of nurturing the precious diversity of life on earth.

“Through the Our Planet Matters initiative, we’ve committed to telling audiences the truth about what’s happening to our environment through a rich body of programming, and inspiring them to make small changes which add up to great change when done by whole communities. By handing out seed-balls to visitors to this piece, we hope to inspire people to create wildlife nurturing habitats in their own homes – whether in a pot, hanging basket or garden.”

Becca Pottinger, Creative Director at BBC Creative said: “Since Sir David Attenborough began his broadcasting career, the planet has lost 50% of its wildlife. It has never been more critical to inspire action and take positive steps towards protecting and improving our biodiversity. We hope the Seven Worlds Living Globe will make its own small contribution.”

Kate Bradbury said: “The idea of creating something for two audiences. Beautiful for humans but a lifeline for wildlife. That’s not something to be ignored”.

The installation, created in partnership with Ambient Media and supported by Talon, will be in and Cardiff between 21-27 October Manchester between 29 October – 4 November before arriving at the Eden Project in Cornwall.