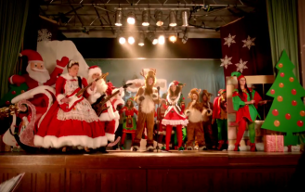 A Children’s series inspired by Henry Winkler’s novel “Hank Zipzer: The World’s Greatest Underachiever” is coming soon to CBBC. Fast-paced and funny, the plot follows a teenager boy in the run up to Christmas as he prepares for a new baby brother.

The music for the series was written by a remarkable Manners McDade composer duo, Nick Foster and Oli Julian. Both composers are well known for writing music for television shows in the UK and US. Nick Foster, a multiple BAFTA-winning British TV composer, has worked on the projects such as: “The Cube”, the Derren Brown specials, “Penn & Teller”, “The Code”, and most recently the rebooted “Thunderbirds Are Go!”. Oli Julian is best known for his work on comedies such as “Catastrophe”, “Cuckoo” and “Plebs”. He is currently working on a number of new comedy pilots as well as the final series of Episodes.

You can watch a preview on BBC iPlayer.