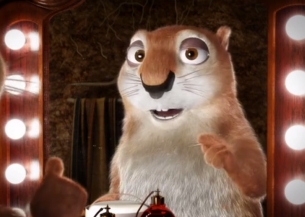 The team at Bazillion Pictures is united in its belief that Groundhog Day just doesn’t get the recognition it deserves - and steadfast in its determination to right this injustice. This year the company created an animated digital spot that uses wit and whimsy to bring this weighty issue to the public’s attention. ‘Showtime,’ the third in the series of videos created annually by the award winning animation and visual FX boutique, taps its multi-disciplined team’s talent for crafting captivating 3D character animation.

“In 2013 we produced ‘The Shadow Knows,’ our first original animated video paying homage to Groundhog Day,” says Jeff Beith, Bazillion creative director and owner. “The response was so overwhelming that we decided to make it an annual tradition.”

Bazillion’s first spot was a stand-alone 2D motion graphics piece conceived by Beith, who enlisted the help of his wife, Laura Huliska-Beith, an accomplished children's book illustrator. It features a docile groundhog partially emerged from a burrow and casting a shadow true to his form. A dramatic drum roll is heard, as his shadow takes on a life of its own. It gets to its feet donning a top hat and cane, and begins to dance, vaudeville style, as it breaks into song, belting out a verse of ‘Rag Time Gal - a shout out to Michigan J. Frog. The groundhog’s shadow then retreats back into his hole as quickly as he came out, once again casting his true shadow, as animated letters appear spelling out ‘Happy Groundhog’s Day!’

Last year Beith and Bazillion’s team of animators and visual FX artists created ‘Forecast: Fact or Fiction,’ a 3D digital spot that provides the groundhog with a public platform for his plight.  The concept for the video challenged them to come up with a captivating visual story that relied solely on the silhouette of the 3D character, scant details revealed by a spotlight, and his voice.

The scenario has Phil, the groundhog, seated in the shadows at a table in his dark burrow, creating a kind of ‘witness protection’ look. As he drags on his cigarette only brief glimpses of the character’s realistic fur can be seen as it catches the bright backlighting, while the weathered rodent recounts the challenges of his job. (‘You try and read a shadow right out of bed, with a spotlight on ya – thowin’ its own shadows.)

“The groundhog spots are a great vehicle for honing our character animation abilities and experimentation, so for 2015, we decided to create a continuation of last year’s video, and fully develop the 3D character,” says Beith. “This year’s animated spot, entitled ‘Showtime,’ is set in bright light, relying almost completely on detailed facial animation to make it entertaining.“

“The new Groundhog’s Day spot is made up largely of sight gags, so we created a very open collaborative workflow between the scriptwriter and the animators - allowing everyone to have input and evolve the concept,” says Beith.

The process started with Bazillion shooting a video of actor Michael Ashcraft, the writer and voice talent, performing the script. Bazillion animators, Brian Lynas and Ben Dallman, used this live action video as a guide for timing and movement to create a rough animatic, and modifications, while incorporating new ideas on the fly.

“The new spot really evolved the character, gave him more personality and fleshed out his, well, groundhoggedness,” says Ashcraft. “We came up with a slightly disgruntled rodent who candidly shares the litany of challenges and pressures that go along with his job – and just how a guy who gets rousted out of a long winter’s nap and thrown into the national spotlight feels,” adds Ashcraft, who has worked with Bazillion for over a decade, giving voice to various characters - from a deranged cow to an intestinal parasite.

After the animation was locked down and the voiceover track put into place, Bazillion’s VFX artists, Tyler Keith and David Humenczuk, used the boutique’s custom animation/graphics workstations and dedicated onsite Render-Farm, along with 3DS Max, V-Ray Render software, Photoshop and After Effects, to integrate a complement of effect. Nihan Yesil then created the sound design and mixed the Final audio on Pro Tools.

The digital character was completed ahead of time, over a period of months, but Bazillion took the animation from script to final product in less than two-weeks, all while also working with clients on their normal workload.

“Bazillion was founded almost 20-years ago, out of a passion for character animation, and has evolved into a full-service creative resource that’s called upon to create broadcast commercials, digital spots, and media content for a variety of markets says Beith. “We enjoy working on a mix of projects - but always jump at the opportunity to create character animation.”