Battle of the Sexes Heads into The Ring in 'The Fight' 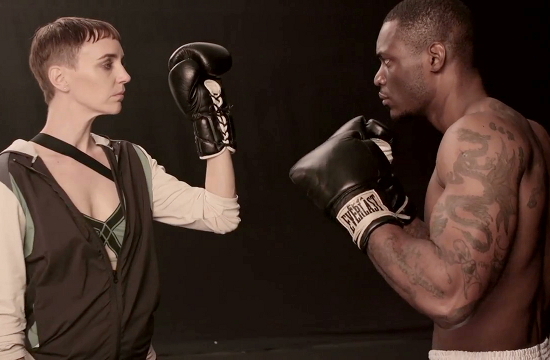 The brand’s stylish active wear-inspired clothing is showcased by Belgian model Hannelore Knuts who comes to blows with boxer Kwame Davis over the course of an unpredictable boxing match between the sexes, with Hannelore landing some increasingly unconventional hooks as Keeve draws out an esoteric take on gender and boxing. Glenn O’Brien who provides the script also co-stars as The Fight’s acerbic commentator.

The film bursts with ideas - moving from straight out punching, to Chaplin homage, to costume changes to dance-offs. It champions women, good clothes, cinema and beautiful imagery.

‘The Fight’ premiered as the featured item of the day on Louis Vuitton’s art showcase website Nowness.com.  It has also been shown at Barney’s New York.

Keeve cites the inclusion of women’s boxing at the 2012 Olympics as the impetus to set a film celebrating gender equality in the ring: “This fantastical and comedic bout between Hannelore and Kwame gives a nod to women who continue to break boundaries,” says the director.

The film is now set to go live on W magazine from the 20th of March.