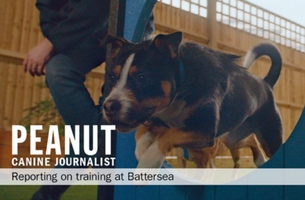 Battersea Dogs & Cats Home, in partnership with Karmarama and Manning Gottlieb OMD, has today launched its first major brand campaign to raise awareness of rehoming rescue animals and ways of supporting the charity. The campaign will begin on 6th April and will continue to run throughout May.
Created by Karmarama with the media strategy executed by Manning Gottlieb OMD, the multi-channel campaign will challenge the common misconceptions about rescue animals whilst driving awareness of ways to support the charity in a light-hearted, joyful campaign. The campaign will kick-off with a 30” TV ad and will feature Britain’s finest (and probably only) animal ‘journalists’: Peanut the dog and Misty the cat. The real-life dog and cat duo will document the unsurpassable standard of care that goes on behind the scenes at Battersea, that results in their animals being so special to rehome. From veterinary check-ups, enrichment activities, training and socialising – Peanut and Misty record it all.
The 30” TV advert will feature alongside mini episodes on the Battersea website where the feline and canine journalists delve further into the expert care Battersea provides for its animals.
The media strategy is designed to reach a wider audience of potential Battersea supporters during the most impactful moments through AV, DOOH and Social. Supporting this is a layer of digital activity that will capture those in the market to rehome and make sure that they think of Battersea first.
This has been achieved by mapping the moments when people are most likely to engage with the content, e.g. when looking to be distracted, entertained or cheered up. The data is then used to deliver the message in a combination of automated, planned and reactive media moments. 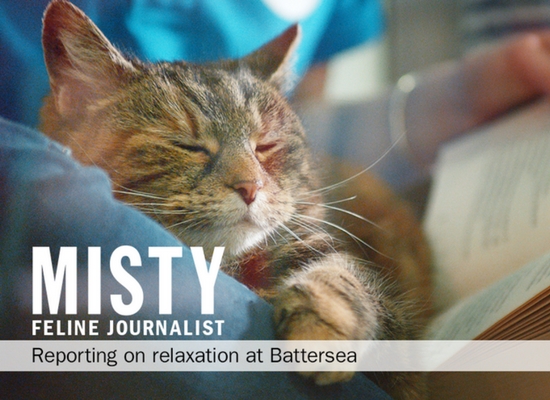 Sarah Matthews, Director of Marketing & Commercial at Battersea Dogs & Cats Home said Sarah Matthews, Battersea's Director of Marketing and Commercial, said: "This exciting Battersea rehoming and awareness campaign aims to reflect the incredible unconditional care our experienced staff provide to every dog and cat that comes through our doors. When you rehome a Battersea animal, they come safe in the knowledge that they’ve had a full Battersea MOT, that can never be achieved online.  We know Karmarama and Manning Gottlieb OMD are equally passionate about portraying what makes Battersea animals so very special to rehome and we're looking forward to seeing more animal lovers choosing a rescue dog or cat in future."
Nik Studzinski, Chief Creative Officer at Karmarama said “Think of the great investigative journalists; Nick Broomfield. Michael Moore. Louis Theroux. And now add Peanut and Misty to the list. It’s been fascinating and an absolute joy seeing them bring the Battersea story to life.”
Geraldine Ridgway, Client Business Director, Manning Gottlieb OMD adds: “We are proud to work with Battersea on their first ever brand campaign and look forward to seeing Peanut and Misty bring additional awareness and support to this fantastic charity.”
view more - Creative