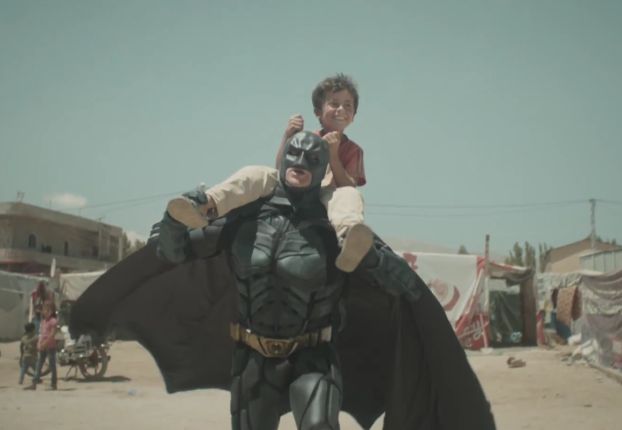 International music agency MassiveMusic has teamed up with War Child, In Case of Fire, Sony and Universal to create a timely and powerful new film that highlights the plight of young refugees.
A young refugee boy strikes up an unlikely friendship with Batman in this charming film that also packs a pertinent punch. Set to Queen’s feel-good track, ‘You’re My Best Friend’, it follows the inseparable duo as they transform the refugee camp into their playground - playing football, arm-wrestling, and hide-and-seek.
The heart-warming mood takes a surprising twist as the masked crusader is revealed to have been the boy’s father all along, and a result of the fantasy world constructed by the child as a coping mechanism to escape the grim reality of his life.
MassiveMusic was tasked with finding and licensing a song that could highlight the contrast between the hopeful opening scenes of the film and the harrowing ending, which brings out the stronger emotional message. After an extensive search for an artist that would give permission for their track to be used for the film, Queen embraced the cause proving their iconic track to be the perfect fit for the narrative and the message.
Thanks to the tight collaboration between all the partners – War Child, In Case of Fire, director Jeroen Mol, RNDBT producer Lex Szanto, Sony and Universal - MassiveMusic successfully secured the label and publisher’s pro bono involvement. As a result of these efforts, the charity is able to distribute the film worldwide and spread a message that’s now more relevant than ever in these times of mass migration and rising rhetoric of exclusion.
MassiveMusic’s Samuel Taselaar comments: “Contributing to this amazing film by playing a humble part has been really special. We fell in love with the little boy and his relationship with Batman right from the start. The ending is something that hits us all, especially in these times of difficulty. I hope the film will move as many hearts as possible.”
Some 250 million children across the world are growing up in the midst of war - many of whom have been forced to flee their homes. These children are confronted daily with the terrible effects of armed conflict. They can’t always handle their experiences alone.
Kadar was forced to leave his home. Together with his father. His hero. He won’t talk about all he has experienced: The bombings. The attacks. The terror. “All the things I’ve seen. They break my heart”.
Fantasy is often the only way for children like Kadar to escape their reality. War Child supports children with vital protection, education and psychosocial support. So they are not alone and can better cope with their terrible experiences. And build a better future for themselves.
view more - Creative