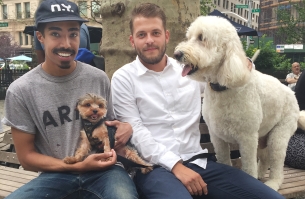 Hagos and Dolphin have unofficially been working together since they were in graduate school at Virginia Commonwealth University and became a team while helping to launch the New York office of Goodby, Silverstein, and Partners. Together, they have produced award-winning breakthrough work for Comcast, New York Post, Street Easy, and Rock the Vote.

“I love the different ways they find creative solutions,” said Gerry Graf, Founder and Chief Creative Officer. “When I look at work, and I can’t figure out how the team came up with the idea, those are the people I really like. Michael and Sam are campaign thinkers who fundamentally understand that breakthrough ideas also need to sell stuff. Not to mention, they’re pretty nice guys to have around the office.”

Before his time at Goodby, Hagos was working as a freelancer for a variety of agencies including Red Antler and Venables Bell and Partners. Prior to that, he spent time some time at Mother NY and Sid Lee, producing creative work for companies such as Target, Virgin Mobile, Stella Artois, Proust eMusic, and JCPenney. Before becoming partners, Dolphin worked as a Copywriter at Wieden + Kennedy, Portland, where he created work for Dodge, P&G, Coca-Cola, Facebook, Nike, American Express, Sony, Special Olympics, and Herbal Essences, among others.