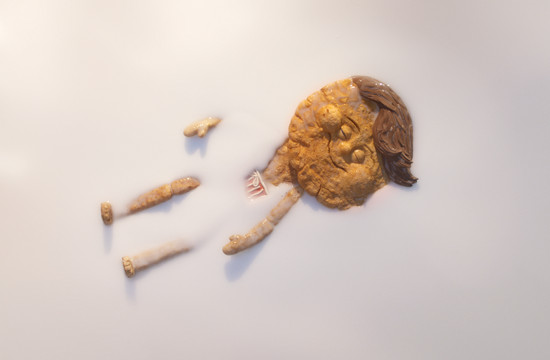 Cravendale returns to TV screens this spring with the launch of the new ‘Barry the Biscuit Boy’ campaign. Breaking on Saturday 29th March, a 30” TV spot will kick off the brand’s integrated campaign, complete with fresh, new packaging in store.

The ad communicates the irresistibly delicious flavor of Cravendale’s ‘filtered to be marvellous’ milk, cementing its reputation as the brand for serious milk lovers and appealing to Cravendale’s core family audience.

Inspired by fables of old, the ad takes Cravendale’s milk-related musings in a deliciously dark new direction, with the twisted tale of Barry the biscuit boy and his near fatal attraction to the cool charms of a refreshing lake of Cravendale.

Created in collaboration with Blinkink, the film combines the visual flair of directors Andy Huang and Joe Mann with the talents of veteran puppeteers Johnny and Will to bring Barry and his milky world to life.

Wieden+Kennedy creative Ben Shaffery says: “We wanted to build a world that felt like nothing we’d seen before. By using a mix of puppetry, stop-motion and CG we were able to marry visually striking modern techniques with the warmth of old-school charm.”

Sophie Macaulay, brand manager at Cravendale said: “At Cravendale, we’re extremely proud of the cult following our adverts have received in the past, and we’re confident that this new ATL campaign will be equally well received. We wanted to use the new ATL to dial up Cravendale’s purpose as a marvellous milk and the role it plays in fuelling family betterness, while at the same time ensuring we surprise and delight our fanbase. We think Barry will certainly do that.”

Breaking on Saturday 29th March during Ant & Dec’s Saturday Night Takeaway on ITV 1, the 30” ad aims to maximise the brand’s exposure amongst milk lovers as well as positioning Cravendale as the ultimate dunking partner. Alongside the TV and print executions, the campaign will be supported by social media activity featuring our very own social media baker, with baker extraordinaire Fancy Nancy engaging with Cravendale fans and creating edible masterpieces in response to cultural moments. The results will be shared on Cravendale’s channels as the campaign unfolds.