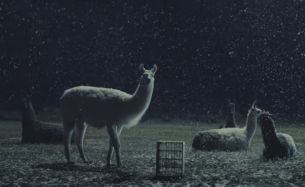 barrettSF is launching its first Christmas marketing campaign for client Cost Plus World Market. The work will run through the end of December.

The three-minute digital short film, titled “The Performance”, tells the story of a young boy who ventures outside to nervously prepare for his holiday trumpet recital. After practising alone for a short time, the boy soon finds himself performing to an unexpected audience in his backyard: a herd of llamas from the hills behind his family’s home. Day after day the boy goes outside to practice, each time improving and gaining more and more support from his new llama friends, until he finally takes the stage for his big holiday performance. The full film is live here and will run as a long-form ad unit on You Tube. Teaser trailers of various lengths will run on the following channels: Hulu, NBC Video On Demand, YouTube, Facebook, Instagram, Pinterest, and in rich media units across the Google Display Network.

“We obviously want more people to buy gifts at Cost Plus World Market,” said barrettSF account director Molly Warner. “But we also see this time of year as a chance to simply put a little joy into the world. If we can do that, we know we’ll get our fair share of holiday shoppers.”

Along with the young boy and the llamas, a main focus of the short film is a single World Market product: a hand-sewn llama ornament. This llama ornament was also front-and-centre in barrettSF’s recent holiday food campaign for World Market, and will be present in all other holiday messaging

As a tie-in to the young boy’s trumpet playing in the digital video, World Market has  partnered with VH1’s Save The Music Foundation to create an exclusive, limited-edition reusable shopping tote. Proceeds from the sale of each bag will help the Foundation restore music education programs in schools.

For in-store initiatives, barrettSF’s creative team worked with World Market to develop three separate in-store programs. Throughout the holiday season, there will be a “Golden Llama Treasure Hunt” taking place across World Market locations, where shoppers can receive daily merchandise rewards when they find a golden llama hidden in the stores. Additionally, there’s the “Peru-se Our Store” scratcher for the first 100 customers on Black Friday weekend that will send a few lucky shoppers to Peru to visit the original home of the llama. For National Llama Day, December 9th, the team helped create the “Lotta Llama Love” contest, where shoppers will be asked to snap a photo with a llama cut-out and post on social media for a chance to win $500 gift cards.

In addition to these programs, there will be a variety of unique in-store activations for shoppers as well. Taking inspiration from the young boy’s trumpet recital, a number of World Market locations will be hosting concerts for young local musicians. Stores will also be raffling off a Kaiser Instruments trumpet to help inspire other young musicians.