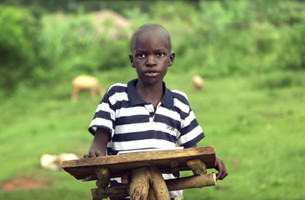 Millions of people in the world live and survive thanks to the actions of aid workers. Without them, there would be no local actions or assistance for deprived populations. However, they are often the targets of violent attacks.

In the past 15 years alone, more than 3,000 aid workers have been killed, kidnapped or hurt while working in the many countries that require their help.

This issue concerns everyone, but few are in a position to take a real stand to strengthen the protection of aid workers. To bring attention to this crucial issue, Action Against Hunger and its agency TBWA\Paris are launching this clever campaign. Along with that they are advocating for action and asks for the appointment of a Special Mandate Holder to the United Nations to protect aid workers.

On Tuesday 8th September they will send a message on Twitter to six of the most powerful and influential people in the world. This personal message will be sent a few days before the 70th General Assembly of the UN (September 15th, New York) to François Hollande (President of the French Republic) and his counterparts Barack Obama, Angela Merkel, David Cameron, Ban Ki-Moon (the Secretary-General of the United Nations) and Zeid Ra’ad Al Hussein (High Commissioner for Human Rights of the United Nations).