Barney Cokeliss' 'Night Dancing' Will Sweep You Off Your Feet

The short film was shot in Bucharest, edited in New York and post-produced in London 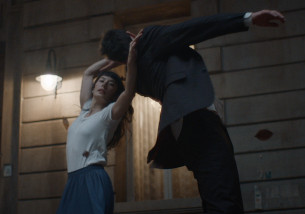 ‘Night Dancing’ was shot in Bucharest, edited in New York and post-produced in London.A beautiful and evocative piece, it is receiving its World Premiere at TIFF 2016.

Q> What gave you the idea for ‘Night Dancing’?

BC>  I’ve always been fascinated by states in which people aren’t sure if what they’reexperiencing is real. And I’m a dance fan. So the story grew from the idea of a characterexperiencing dance in an unexpected place and being unsure if it’s real.

Initially I explored giving the character physiological reasons for the visions – CharlesBonnet syndrome is a fascinating example. But in the end it was more powerful to look atpsychological reasons why someone might lose their sense of what’s real or not. Asituation where an obsession manifests itself in what you see, or think you’re seeing.

BC> I love watching dance – companies like NDT, Pina Bausch, Michael Clark – but I’m notalways sure I understand it. I like that aspect – the fact that it’s evocative and suggestive butalso mysterious. And the wordlessness of it appeals as a fundamentally cinematic quality.

So I’ve long wanted to incorporate dance into a film. But I didn’t want to make a straightdance film – I had to find a story where the dance was an organic part of what thecharacter experienced. So, while the dance in ‘Night Dancing’ is beautiful, I hope whatstands out most is the story.

Q> The ending is ambiguous – do you see it as hopeful or sad?

BC> Well, on one level the film is a snapshot of mental illness. The lead character is sufferingand what sense of hope there is at the end is partly from within the framework of hisobsession. For someone who’s obsessed – which literally means ‘besieged’ or ‘surrounded’– the only real escape is the end of the obsession. That’s not what happens here. But on abroader level, I’d love the audience to feel some beauty and hope at the end of the film.

Q> You have a background in photography – how does that inform your workwith your DoP?

BC> I have a great relationship with Philippe Kress. It’s very open and exploratory. On apractical level, it made sense to shoot the dance sequences with two cameras, so Philippeand I operated one each. I like operating myself as it means I can be spontaneous. I canhave an idea or a response to a piece of performance and just go with my instinct. Whensomeone else is operating, that same idea or response gets channeled into a discussionbefore the next take, and then the next take may be different.

Q> How did you work with composer Anné Kulonen on the project?

BC> ‘Night Dancing’ was the quickest turnaround I’ve ever had between writing somethingand shooting it; really just a matter of days. So there wasn’t time to write the music inadvance. Instead, we established a tempo for the dancers to work to, and then Anné wasfree to respond to what she saw in the edit and bring out the emotion in the story. Thescore was written in New York and Los Angeles, and then recorded in London. For me,one of the most exciting times in any production is when you hear the players perform thescore on real instruments for the first time.

BC> I’m adapting an amazing short story by JG Ballard as a feature film. It’s a huge honour tobe working with such unique source material.