Agency shakes up Uber rides in Nashville, Denver and Seattle 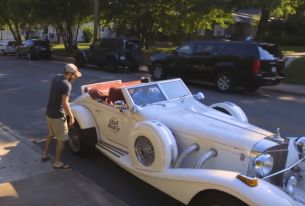 When Hershey relaunched its TAKE5 bar, it worked with creative agency Barkley to remix everyday experiences for its potential millennial customers, whether that’s conference swag or music festivals. In their latest activation, they remixed a nearly universal millennial experience: the Uber ride.

Hershey and Barkley teamed with Uber to shake up the Uber ride in three markets—Nashville, Denver and Seattle—chosen for their large millennial populations. When people called in a ride, they weren’t created with Civics or Priuses but exotic cars of every kind: McLarens and Lamborghinis to dump trucks, Duesenbergs, monster trucks...even motorcycles with sidecars.

In order to call the cars, riders selected TAKE5 Uber Remix and entered a promo code. The riders couldn’t choose their vehicle, so every ride was a surprise. The results? More than 20 million total impressions, 300,000 samples distributed, more than 2,000 requests, and 388 TAKE5 UberRemix Rides.

“The marriage of a truly, unique remixed ride plus the ultimate remixed bar was a natural fit for Take 5 and also one that we hope our fans will never forget.  We aimed to provide a once in a lifetime surprise and delight," said Chris Kinnard, brand manager, Hershey. “The best part was the look of shock on people's faces when they realised their Uber was a motorcycle sidecar or dump truck. We wanted to remix an experience that's become commonplace for most consumers.”