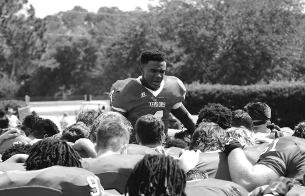 Russell Athletic and its agency, Barkley, partnered with five high school student photographers from across the country to capture the season-long journey of high school football. The student photographer project is an an extension of Russell Athletic’s  #SettleYourScore campaign, which follows six high school football teams who lost last season’s state championship by a touchdown or less as they turn the one thing that haunts them into the ultimate motivation.

Each week of the high school football season, Barkley gives the student photographers an assignment based on a core principle of team - themes like camaraderie, community, leadership and anticipation. The students capture photos throughout the week and during the game on Friday night that relate to the theme. Through an online forum, the students submit their photos and stories each week for the Barkley content and creative team to critique and provide specific feedback on framing, lighting, cropping and storytelling. The student’s photos are featured across Russell Athletic’s social channels. Two students photographers, whose photos show the most social engagement, will become to official on-field photographers at the Russell Athletic Bowl in December.

“The students behind the lens are a part of the team,” says Brad Jungles, Creative Director at Barkley. “They capture the moments that live forever, so we wanted to make them a central part of our efforts. Our campaign is rooted in the voice of real teams, towns, and coaches, not paid actors and fake pep talks, so these students are our storytellers.”

As the defender of team sports in America, Russell Athletic hopes that this project will shine a light on the lifelong benefits of participating in team sports and inspire the next generation of sports photographers.