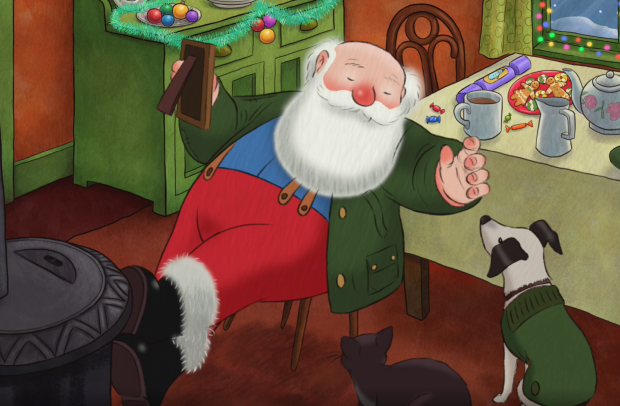 Barbour has launched its 2019 Christmas campaign. This year it's inspired by the popular children’s book Father Christmas, originally written and drawn by author and illustrator, Raymond Briggs.

Capturing the spirit of Christmas through a witty and charming tale, ‘Thanks Mrs C’ follows Father Christmas through the decades as he delivers presents with the help of his old faithful Barbour wax jacket which protects him from countless adventures along the way. It brings to life the world of Father Christmas in a sentimental and heart-warming story that celebrates Barbour’s 125th anniversary and the longevity of their iconic wax jackets.

Inspired by the Raymond Briggs book and iconic 1991 animated special, Father Christmas, this year’s film tells the tale of Father Christmas in his Barbour waxed jacket which has seen him through 125 years of Christmas Eve present drops. The film explores how the jacket has picked up scuffs and scrapes over the years but has always kept him warm and dry.

Flashing back to 1894, Father Christmas is gifted a new waxed jacket by Mrs C who gave it to him as a replacement for his old jacket which had become worn out over the years. We then see Father Christmas delivering presents on Christmas Eve in three different decades, the 1930s, 1960s and 2019 and the challenges he has to overcome delivering presents. The end of the film sees Father Christmas sitting comfortably at home after another busy present drop with a hot cup of tea, thanking Mrs C for her thoughtful gift which has looked after him for the last 125 years.

Award winning 2D animation studio, Illuminated Films, produced the animation for the film using computer assisted animation, compositing and special effects software TV Paint. “Thanks Mrs C” was directed by Dave Unwin, director of the original 1991 animated special, along with Art Director, Loraine Marshall and a number of leading British animators. Working closely with the team at Illuminated Films, Barbour’s integrated creative agency, Thinking Juice, one of the UK’s top ten independents, came up with the narrative of ‘Thanks Mrs C’ and the creative elements of the campaign.

The agreement was brokered by The Copyrights Group, a Vivendi Company, who have been the licensing agents for Father Christmas for nearly 30 years. Rachel Clarke, SVP Licensing and Retail UK at The Copyrights Group said “We are thrilled to once again be partnering with Barbour for this new Father Christmas project. We are really looking forward to seeing the campaign come to life”.

Paul Wilkinson, global marketing and commercial director, said: “For our 125th anniversary year, we wanted to do something special for our Christmas campaign. Raymond Briggs’ Father Christmas is a much loved children’s book and it has inspired our film, which as well as capturing the spirit of the festive season in a humorous tale, also allows us to demonstrate the sustainability of our iconic wax jackets which, if rewaxed regularly, will last a long long time.”

Iain Harvey, producer at Illuminated Films, says: “The vision that Barbour shared with us for this fantastic campaign complements the brand of Raymond Briggs’ iconic Father Christmas. The character is part of British heritage for so many families every Christmas and to celebrate 125 years with Barbour is certainly an exciting moment in the character’s own timeless history. For us at Illuminated Films, having recently celebrated 25 years, we can’t imagine what the next century will envisage!”

A special limited-edition Father Christmas pin will be given away with every Barbour purchase in selected stores and online.