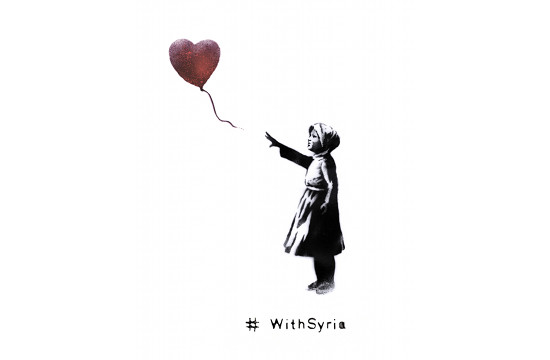 Banksy, Idris Elba and Elbow are just some of the stars who are supporting the #WithSyria campaign that will see thousands of people across the world, from Moscow to Washington, stand together in a global vigil to mark the 3rd anniversary of the crisis in Syria from Thursday 13th March.

Iconic locations across the world will be bathed in light by candlelit vigils, a Banksy light projection using his artwork which he has redesigned to feature a young Syrian girl holding a red balloon, and the release of red balloons, carrying messages of hope to Syrians.

Syrian voices have joined a coalition of 115 humanitarian and human rights groups from 24 countries, including Save the Children, Oxfam, Amnesty International, Hand in Hand for Syria and the International Rescue Committee, to simultaneously launch a pledge for world leaders to commit to making this the last anniversary marked by bloodshed.  The campaign is calling for urgent action to ensure Syrians in need – including civilians in areas under siege - can access aid, and for the voices of ordinary Syrians to be heard and heeded in reconvened peace talks.

Justin Forsyth, CEO of Save the Children said: “For three years Syria’s children have endured unacceptable suffering. The impact of this crisis has been devastating. Doctors that we work with on the ground have told us children are having limbs amputated because basic antibiotics for less serious wounds are not available and newborn babies are dying in incubators due to frequent power cuts. Full humanitarian access would help injured and sick children receive the medical care that they need. The UN resolution on access must be implemented. Tonight's vigil, and vigils around the world, are to show the people of Syria that we care and that we are demanding world leaders take action to end this conflict now."

Actor Idris Elba explained that "it was important for me to support and lend my voice to this animation that alongside Banksy’s new piece is part of the #WithSyria campaign. Ordinary Syrian civilians continue to pay the heaviest price in a conflict that has already wrecked millions of lives. Let's stand with Syria today".

Oxfam's chief executive Mark Goldring said “Syria has been devastated by three years of conflict.  More than 2.5 million Syrians have fled the country and the lives of millions more have been shattered. The international community has shown it can unite on Syria, but it must be consistent to ensure there is a halt to the bloodshed and an adequate aid response. Countries must give generously to the UN’s humanitarian appeal for $6.5bn, which is severely under-funded, and reconvene inclusive talks on the future of the country as a matter of urgency."

Sunshine’s founder and Executive Producer, Kit Hawkins said “it is a privilege to get the opportunity to draw attention to the Syrian conflict and its human costs, working alongside the other agencies and NGOs and with the support of Banksy, Elbow and Idris Elba, to encourage the efforts of all those focused on alleviating the crisis and give hope to the people of Syria that this could be its last year.”