Bangkok: The New Hollywood of Asia

Trends and Insight 750 Add to collection

Loud voices and harsh words won’t get you very far in Thailand but comedy and quirkiness will. Bangkok’s top commercial producers reveal the city’s best-kept secrets 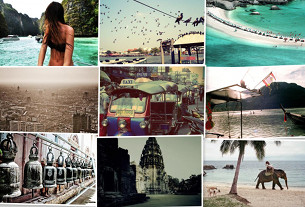 With its close proximity to Singapore and settled snug in the centre of South East Asia, Bangkok offers agencies more than an affordable central hub with its top-notch production crews, highly skilled art departments, a deep international casting pool and amazing selection of diverse locations. It’s little wonder that Bangkok has been dubbed ‘The Hollywood of Asia’ – without the price tag.

Catching up with locally renowned production houses The Sweet Shop, Great Guns, Bullet and SuperFine, Larissa Meikle speaks with top locally based commercial producers to get an ear to the ground on what it’s like to shoot in Bangkok.

Managing director and executive producer of The Sweet Shop Bangkok, Claire Davidson, says 85 per cent of the production company’s work comes from regional APAC and global agencies, particularly because clients are familiar with The Sweet Shop brand and its overall understanding of executing a job anywhere in the region.

“They know that by coming to us, they’ve opened a door of possibilities not only from a creative perspective but also from a production perspective,” Davidson said.

“Great Guns is focused upon utilising the skills and expertise of our production team here to produce work for the entire Asia Pacific region; in fact for all of Asia,” said Wyant.

“Recognising that several global brands have chosen to base their operations here in Bangkok, as opposed to the regional base in Singapore, and that there’s a growing market for global brand marketing in Thailand itself, we’ve been looking more closely at work specifically for the Thai market and to developing directors from the region to join our team,” he added.

Over at Bullet, producer Eimear Jenkinson says work comes from both local (40 per cent) and global (60 per cent) agencies. This is close to SuperFine’s breakdown, which producer Monchanok Bhumichitra Tantitemit says is a 30 per cent local versus 70 per cent overseas split.

Benefits of a Bangkok Base

A known hub for international agencies and clients, and also international crew, there are many flights going in and out of Bangkok. Davidson also points out that the production crews and facilities are the best in the region (many of them service Hollywood productions), thus providing training money can’t buy.

“We have a multicultural diversity in the talent pool on offer, a solid infrastructure, a huge variety of location options as well as strong post production,” she says. “At its essence, Bangkok offers world-class technical standards and unbeatable value for money. Not to mention Bangkok has amazing food everywhere!”

Over the past decade, the film and television industry in Bangkok has not only unearthed the most technically skilled crews but also, according to Wyant, the art departments have the skills to transform any Bangkok location to a desired look and the array of studio spaces to build and dress sets are also at a world class standard.

“The international nature of the city provides as deep a casting pool as any you’ll find in Asia, and the environment is production friendly,” Wyant said. “Add all that to the vibrant artistic community here, and everything the city has to offer to entertain clients, the close proximity to the regional agency and client offices in Singapore, and the choice of Bangkok as a production base was a simple one for Great Guns.”

With offices in both Manila and Korea, Bangkok is Bullet’s main headquarters. “Bangkok is an excellent base for us. It’s geographically based in the centre of South East Asia,” says Jenkinson. “It’s also very cosmopolitan so casting is never really an issue, especially for our global jobs.”

Tantitemit of Superfine agrees that a rich cultural scene has its benefits along with support from the Thai film board authorities. 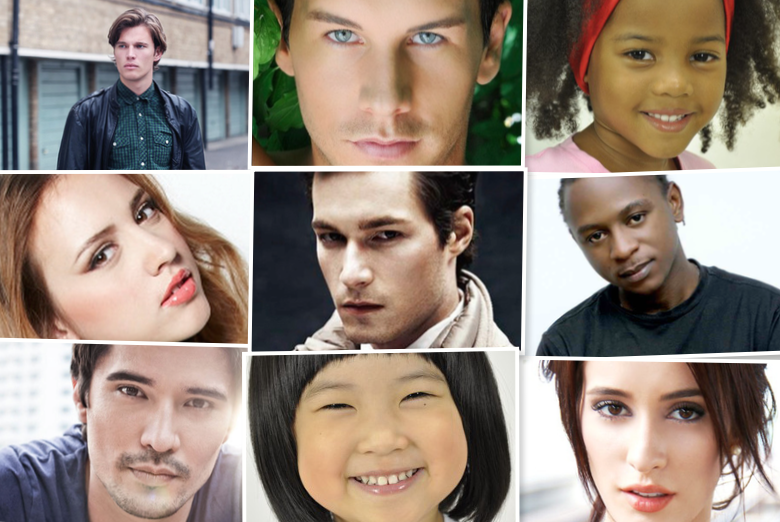 The South East Asian region is culturally diverse with particular sensitivities and nuances unique to each country. For example, Davidson says in most countries, exaggerated expressions of appreciation seem to be the preferred communication in television.

“The Thai people, despite being softly spoken, are very proud as a nation with a certain set of ways of conducting themselves socially and professionally,” she says. “Loud voices and harsh words will not get you far in Thailand. Comedy and quirkiness in advertising will though. In Muslim countries like Indonesia and Malaysia, we need to be mindful of the male-female dynamics because of the religious culture. In India, the bigger the better! The list goes on and on. It’s what makes the job exciting.”

Wyant agrees that Thais love comedy, and theirs is a very particular brand of comedic storytelling: “It’s sometimes broad, always playful, and that playfulness bleeds over into work that’s not necessarily comedy, as we’d know it in the West.” He adds that heartwarming pathos is also a quality you'll see a good deal more of in Thai commercials for their major brands.

Over at Bullet, Jenkinson says the local work tends to be less image and more product related. “These spots are generally more direct in their approach, with a strong emphasis on the product and the aesthetic rather than the storytelling,” she said.

Thailand offers a huge variety of locations – from skyscrapers to slums, city views with modern sky trains to luscious tropical mountain capes, and elephant-inhabited jungles to sparkling golden temples. And then, of course, there are the beaches!

Davidson points to Chinatown for its amazing energy and buzz, which is hard to find anywhere else. She says it’s also one of the most difficult places to shoot logistically. The city also has great studios and mansions but outside of Bangkok? Well, there is a wealth of locations. “The landscape is varied and very versatile – Thailand is frequently doubled as other countries in both films and TVCs. Similarly, Thai performers often stand in for other cultures.”

With actors and stuntmen particularly proficient and well trained, she explains that if dialogue is required, actors are able to learn and deliver lines in any dialect, as appropriate to the on-air location.

Wyant’s two favourite locations are the historically preserved small village Sri Pra Chan in the Suphan province (about two hours north of Bangkok) and the helipad on the top of the CAT Tower in Bang Rak, with an amazing view over the Chao Phraya (Phraya River). Great Guns made use of both locations on a recent project for Tiger Beer.

Tantitemit also hints that community malls and residences shouldn’t be overlooked as a great pocket of colourful culture.

Jenkinson agrees that shooting in public places is never a problem. “We're very lucky here in Bangkok,” she said, adding: “There are some fantastic private properties and studios. Not to mention the beautiful beaches which can be easily accessed from Bangkok. So really the options are endless.” 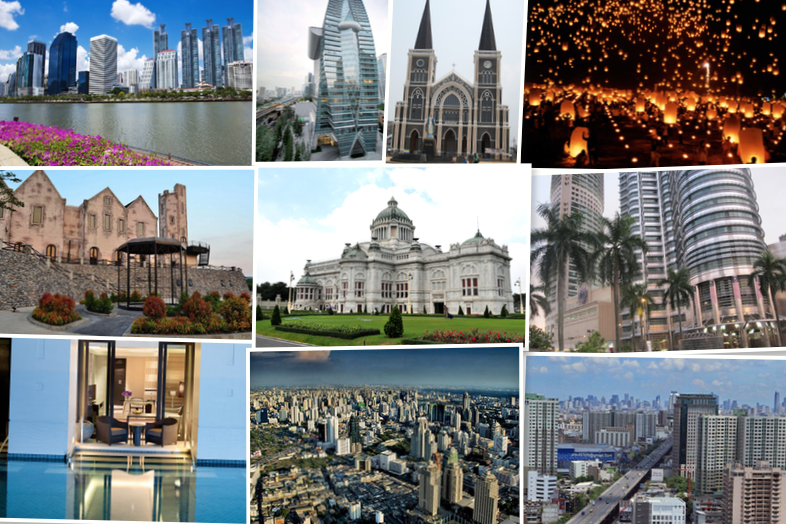 Bring On The Future of Bangkok

As the European economies weaken and Central and Eastern Europe becomes more open to international production, the challenge is for Bangkok to keep delivering value for money. “Bangkok is definitely enjoying its status as one of the best production hubs in the region, but it must constantly evolve to be able to stay cost effective and offer added value to international clients,” said Davidson.

Tantitemit agrees that “competitiveness” is a top concern along with budget shrinkage.

From a creative point of view, Jenkinson would like to see the quality of work continuing to rise. “It’s nice when you work on a project where creative content is given priority over the approval process so we'd like to see more of that in the future,” she admits.

But to Wyant’s mind, the biggest challenges for the production industry in Bangkok may be only those of perception… on a couple of levels. “For those who’ve not worked here, there may be a sense that the offering is not as sophisticated, modern, and diversified as it actually is. Culturally, Bangkok is a very modern city, but one with soul and character, and that’s rare.”

He mentions that over the past year or so, there has been a good deal of reporting in the international press about political struggles within Thailand, and in many cases, from his observation of working in the city throughout that period, it was to some degree exaggerated.

“I know that the perception of instability has caused some nervousness among agencies and clients about shooting in Thailand. I’m the newcomer here, but truthfully, from my perspective, and from everything I’ve heard from my Thai colleagues, as well as those expats who have lived and worked here for a number of years, there is no cause for concern about the ability to produce creative content in Thailand on every level, without interruption or difficulty, in a safe environment, and with some of the nicest, most professional people you’ll find anywhere in the world.”

Images courtesy of The Sweet Shop.