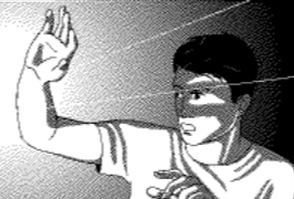 M&C Saatchi Sport & Entertainment has unveiled the results of a unique creative collaboration for The Jameson Works between British band Wild Beasts and Parisian animator and GIF-maker Mattis Dovier, presenting a GIF-Novel with digital design and production by M&C Saatchi.

This project is part of The Jameson Works, a home for modern makers where Jameson team up with interesting craftsmen to create original projects, and facilitate the work of aspiring makers through bursaries. At The Jameson Works we are about the process as much as the finished product, sharing the knowledge and telling the stories of how the work is made, tracking the process of all our projects along the way.

Back in September, Wild Beasts got together with Mattis and set out on a three-month project which responded to the simple brief ‘Storytelling’, set by The Jameson Works. The result… a striking and innovative set of GIF animations which visualise the stories of two unreleased Wild Beasts tracks, Soft Future and Blood Knowledge. The creative harks back in style to retro pixel-art, alongside influences of Japanese manga, visuals with which the band and Mattis have a strong affinity.

Wild Beasts on the collaboration said: "The first time we came across Mattis’ work we knew we had to work with him on this project. With his GIFs he was doing it differently from others, something we always look for when collaborating with someone. We loved the idea of the GIF being the current comic strip and I think we’ve managed to achieve this in a new and innovative way with the GIF-novel."

The GIF-Novel tells two stories, the story of a human experiencing a futuristic world for Soft Future and a robot exploring a human world for Blood Knowledge. Each story is inspired by the tracks, designed to show the feelings experienced when listening to the music.

Sitting online at thejamesonworks.com/gifnovel users can decide which story to follow and therefore which track they will hear. They can then flip between each story via the space bar on their computer or tap with their finger on an iPad or smartphone (both Android and IOS). As the soundtrack plays, new GIFs will be revealed.

As the project progressed and the storyboards finalised, the band went back into the studio and edited the tracks to complement the GIFs. This was a completely new experience for the band, as they were essentially sound tracking the GIF-Novel, responding to Mattis’ designs with their music. After all the GIFs are revealed, the unreleased tracks will then play out in full at the end of the experience.

Wild Beasts added: "Although these tracks never made the original record, they were massively integral to it and we’re so pleased we’ve managed to use them in this way. It’s allowed us to rediscover the tracks, take them apart and put them back together again. The whole project has been a very important experiment for us and hopefully for Mattis too."

Dave Roberts, Deputy Marketing Director at M&C Saatchi Sport & Entertainment, added: “This has been a brilliant project to be a part of, and working on it has brought together creative and digital talent from across our agency Group. It is an exciting glimpse of the future of storytelling, and we hope it proves inspiring to others.”

Patrick Venning, Marketing Director at Pernod Ricard UK, comments: “The aim of The Jameson Works campaign is to celebrate the brand’s passion for craftsmanship and the art of storytelling. The emphasis isn’t just on what is made, but how it is made. Through this first project with Wild Beasts, we couldn’t have hoped for a more engaging campaign, not only through the beautifully conceived GIF-novel, but also through the illuminating behind-the-scenes content, which documented the making process every step of the way.”