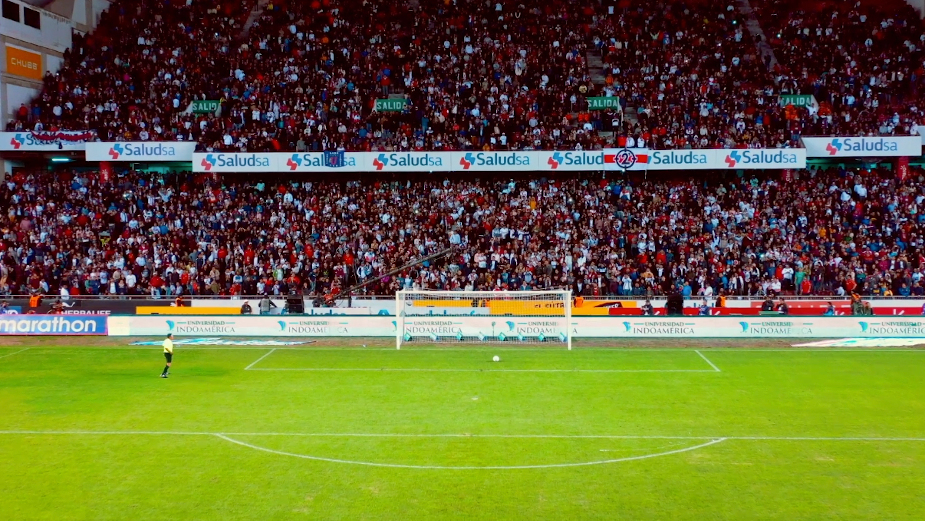 MullenLowe Delta and its client Banco Pichincha, the main sponsor of Liga Deportiva Universitaria de Quito soccer team, launched a campaign to remind us of the importance of gender equality in sports.

At the team’s home stadium, MullenLowe Delta and Banco Pichincha staged a soccer match with a twist – it was invisible. With the stadium at full capacity for the men’s game, ‘Unseen Players’, started at half time, with only three referees and a ball on the field. Supporters saw the match unfold with fouls and free kicks, but no players in sight.

The ball was controlled by a radiofrequency device developed by PASTO from Argentina, to look as though it was being kicked by invisible players. Fans were surprised but excited, celebrating every move from this invisible team that ended with a big goal celebration.

Following the activation, a message from Belén Aragón, captain of the LDU team appeared on screens around the stadium: “Like this match, there are 234 matches that very few people see. It is very important that together we promote gender inclusion and equality in sports”. After her speech, the men's team welcomed the 'white warriors' forming an honor guard on the field, applauded by the supporters.

María Augusta Tutilillo, Advertising and Promotion Manager at Banco Pichincha says: “As LDU supporters and as women, we are constantly looking for opportunities to promote gender equality. This was short but striking activation made a powerful statement and we hope will really make a difference for women’s sport.”

Marco Salvador, General Creative Manager of MullenLowe Delta added: “Data was key for generating the idea. It was shocking to find out that most of Liga Deportiva Universitaria de Quito supporters are women. This helped us to see a great opportunity to bring the LDU women's team to a new audience and connect with fans in a meaningful way.”

Banco Pichincha has historically worked for gender equality from its business line and from its brand. Over time, and being consistent with its actions, it was the first company in Ecuador to become a signatory to the United Nations Women's Empowerment Principles. It was also a pioneer in joining the Financial Alliance for Women, which supports initiatives focused on women's financial growth and awareness of their important role in the economy. Currently, Pichincha is a leader in developing finance programs for women-led micro, small and medium-sized enterprises.