Opera and skateboarding come together in new Stay True film 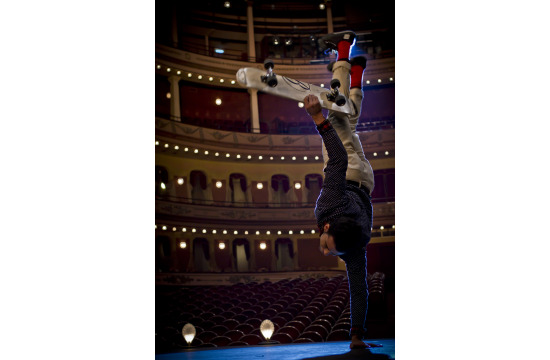 Ballantine’s, the world’s No 2 Scotch whisky, has today launched a new online film featuring one of the world’s most respected and creative freestyle skaters – Spanish-born Kilian Martin – who takes his board into the rarefied world of theatre, creating a stunning reinterpretation of Bizet’s classic Spanish-set opera ‘Carmen’.

Growing up in Madrid, Kilian developed an early love of gymnastics and artistic expression, all of which helped him to develop his own unique, dance-like skateboarding technique. The collaboration with Ballantine’s sees him participating in a unique experiment, which draws from each and every one of these personal life influences, fusing all of the experiences in his life that he has stayed true to and with the goal of inspiring viewers to Stay True to themselves.

The film sees him arriving at a grand theatre where, during rehearsals, his story unfolds and we come to understand how his one-off personal style has developed. In a climactic and dramatic finale, Kilian then takes to the stage for a stunning reimagining of the ‘Toreador Song’ from Bizet’s Carmen – a performance full of creative flair, skill and a technical mastery of the skateboard.

The campaign has been developed for Ballantine’s by M&C Saatchi Sport & Entertainment and digital agency Work Club in order to extend the recently launched ‘Stay True, Leave an Impression’ global brand positioning into PR and digital. The film launched exclusively with global trend site HypeBeast, and will be promoted throughout key Ballantine’s markets.

Dave Roberts, Deputy Managing Director of M&C Saatchi Sport & Entertainment commented: “Kilian is the very embodiment of what Ballantine’s mean by Stay True. With this inspiring production, we’ve managed to celebrate a genuinely unique talent in a wholly unique and unexpected way.”

Kilian Martin commented on the film: “For me, skateboarding is the ultimate way I express myself, my passions and who I am. I’m a strong believer that you should stay true to yourself and where you’ve come from, so combining all of my life’s passions into this film and paying tribute to Carmen, has been so rewarding.”

Joe Corcoran, Creative Director at digital agency Work Club added: “There are thousands of great skateboarding films uploaded to the web every day; none of them are like Kilian's. We hope it will inspire others to always stay true to themselves.”

Kilian has been chosen as the embodiment of what Ballantine’s means by ‘Stay True’; someone who expresses themselves with honesty, informed by life experiences – someone who is living their life and challenging themselves not for adulation and applause, but out of self-belief and a dedication to who they truly are. The inspiration for the film featuring Kilian was directly born out of his own ‘Stay True’ story. Previous skateboarding films featuring Kilian have been viewed over 10m times online by fans around the world.

The film is part of Ballantine’s recently launched ‘Stay True, Leave An Impression’ global marketing campaign, which encompasses the entire Ballantine’s brand portfolio and serves as an invitation to express ourselves in a genuine and authentic way, applauding self-belief and conviction. An accompanying advertising campaign for Ballantine’s is rolling out globally, with a TV commercial ‘The Drummer’ airing in selected markets around the world.

Peter Moore, Global Brand Director for Ballantine’s commented: “Kilian is not only hugely talented and amazing to watch when he’s on his board, but his is a truly inspirational story that really demonstrates what it is to Stay True. He’s full of conviction and belief in his own ability, but at the same time he’s humble and isn’t doing what he does out of any sense of vanity. Whilst we’re not all going to ever be able to skate like Kilian, what he has achieved by staying true to himself and to his own unique style is truly inspirational.”