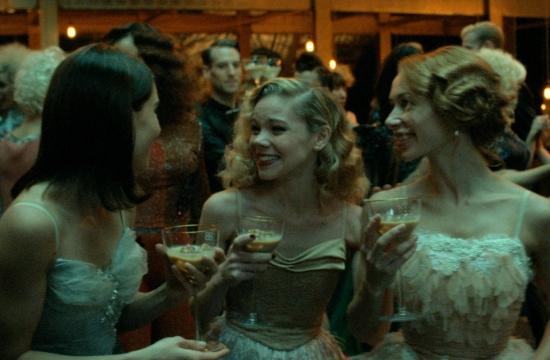 On Saturday 16th November during the UK television premiere of the Oscar-winning feature film, Black Swan, BAILEYS, the Original Irish Cream, will unveil its new advertising campaign with a spectacular modern retelling of Tchaikovsky’s traditional ballet, ‘The Nutcracker’.

The two minute film re-imagines the familiar Christmas tale as a cool, sophisticated fable for a modern audience. The new campaign reminds women to make time for their friends this Christmas, and positions BAILEYS as a glamorous, spirited drink to enjoy together.

The films tells the story of a girls’ night out at Christmas time. After arriving at a glamorous party in Candyland, the lead, Clara, catches the eye of the ‘Nutcracker Prince’, and the pair begin to dance flirtatiously. However, the ‘Mouse King’ also has his eyes set on Clara, and jumps down from the balcony to make himself known. The atmosphere darkens, and so begins a thrilling dance sequence as the men fight over Clara. The excitement builds to a spectacular crescendo, but after coming to the rescue of the ‘Nutcracker Prince’, Clara rejoins her group of girlfriends to continue partying the night away. The film ends with the line ‘Spend time with the girls this Christmas’.

In 2012 BAILEYS unveiled its most ambitious marketing campaign to introduce the new brand endline; ‘Cream With Spirit’. The ‘Cream With Spirit’ campaign, also created by BBH, was designed to shine a light on women and celebrate the spirit of modern womanhood.

The new film was shot by Ringan Ledwidge, who is widely acknowledged as one of the industry’s top commercial directors. Ringan recently received the coveted Chairman’s Award at the British Arrows, was rated as the UK’s No1 Director by Campaign Magazine for the third time, and was named the second Most Awarded Director in the world by the Gunn Report. Ringan has directed award-winning campaigns for Barnardo’s, John Lewis, and Levi’s, to name a few. In 2012 he directed BBH’s multi award-winning ‘Three Little Pigs’ campaign for the Guardian.

The wardrobe was styled by the renowned costume designer, Rosa Dias. Rosa has won numerous awards for her work, including Best Costume at the British Arrows Craft Awards. Rosa also worked alongside Ledwidge and BBH on the Guardian ‘Three Little Pigs’ film. The epic set was designed by Sarah Greenwood, one of the world’s foremost production designers and a four-time Oscar nominee. Sarah has created sets for blockbuster films including Pride and Prejudice, Atonement and the Sherlock Holmes series.

The original Nutcracker soundtrack was re-scored for the film by composer, pianist and producer, Nicholas Britell.

Chin Ru, Global Strategy and Communications Manager for BAILEYS said: “With this campaign we wanted to transform the way that Baileys is seen by women at Christmas. The festive season is a time for celebration and spending time with friends, and Baileys is the perfect glamorous, spirited drink to enjoy with the girls. We hope that the glitz and glamour of this spectacular film gets our audience excited about the Christmas period, from the anticipation before a big party, to the sense of belonging when you and your friends come together.”

David Kolbusz, Deputy Executive Creative Director at BBH said: “We wanted to make a celebration. An extravaganza. Hopefully it's something pretty different to a lot of the ads you tend to see out this time of year. It's always a treat to work with people you love working with too. Ringan is so much fun to collaborate with and I love that every project we do together is nothing like the last. Benjamin was unbelievably fast and good and surprisingly down to earth for a guy who's about to run the Paris Opera Ballet. Team BAILEYS were amazingly supportive and as passionate about the project as those of us doing the creative work. Gold stars all 'round.”

Benjamin Millepied, the choreographer, said “BAILEYS was a pleasure to work on because of the artistic level of the talent associated with the project, the creative freedom we were given, and the quality of the idea."

Ringan Ledwidge, the director, said: "BAILEYS was an amazing job to work on. I have a great relationship with BBH and David and throughout every level of production I was collaborating with people at the top of their game, and I think that shows. There were no egos, just everyone working hard to achieve what we all thought could be a wonderful piece of film. Garbhan O'Bric, the Global Brand Director for BAILEYS, deserves a special mention. I think it's the first time ever that a client has asked me to make work that would make them feel 'uncomfortable', and then stuck to that maxim throughout the process."