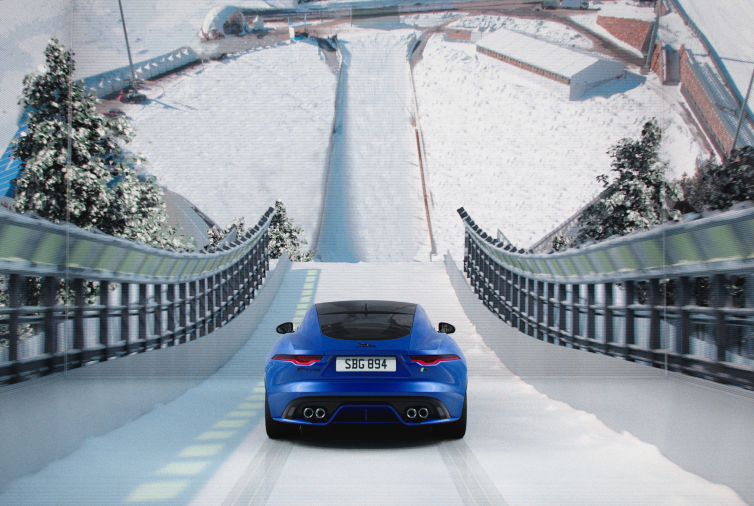 Jaguar and Spark44 has worked with multi award-winning director William Bartlett on a collection of six films starring the new F-TYPE sports car.

Bartlett won a BAFTA for his work on SS-GB and has created the title sequences for James Bond movies Goldeneye, Tomorrow Never Dies and Spectre. The new films use innovative storytelling techniques and combine live action and computer-generated images, allowing you, as the campaign says, to ‘Just Imagine’ the thrill of driving or sitting in a new Jaguar F-TYPE.

Designed to coincide with the new F-TYPE arriving in showrooms, they are the result of extensive collaboration between Jaguar, Spark44 and London-based Framestore Pictures. Director William Bartlett places the new Jaguar F-TYPE in different scenarios to highlight its features. It races alongside galloping horses to showcase the 2.0-litre Convertible model, leaps off a ski jump to promote the power of its 5.0-litre V8 R version and shows off its handling on a Hot Wheels-inspired track. It’s also the centre of attention as a photographer snaps images, and it shrinks to the size of a stitch in the trim to show its beautiful new interior.

Andy Hunt Cooke, Jaguar global communications senior manager, said: “The new Jaguar F-TYPE was designed to inspire extraordinary journeys. By using the latest innovative film techniques we have taken the driver to a hyper-real world, so they can imagine the thrill of experiencing it and the pride they would feel as an owner of such beauty, craftsmanship and sporting dynamism. “Our partners Spark44 and Framestore both fully embraced our philosophy of fearless creativity driving progress – the spirit that makes Jaguar unique in the automotive world.”

William Bartlett, executive creative director, Framestore, said: “As an iconic British brand there are few car makers that capture the imagination in quite the same way as Jaguar. “The combination of the technical and aesthetic challenge, mixing live action and CGI was right up my street and the sort of job that always gets me excited. And of course, since a large part of our responsibility is to make beautiful images it certainly helps when at the centre of every frame is Jaguar’s new F-TYPE.”

The new Jaguar F-TYPE in the films looks more beautiful than ever and embodies Jaguar design DNA in its purest form. The two-seat sports car offers a perfect balance of performance and driver reward with an even more muscular, assertive design and a cabin defined by rich, luxurious materials and beautiful details.