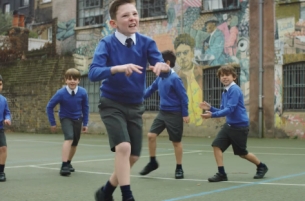 The five breakdancing schoolboys from Grey London’s first Vodafone UK ad, are being given the chance to show off their moves to promote the Spotify Premium service on Vodafone 4G.

To build on the proposition that Vodafone 4G allows you to live life more boldly, the children are seen throwing some impressive dance moves in the playground, which they choreographed themselves.

Directed by We Are From LA, the French duo behind Pharrell’s ‘Happy’ video and the ground-breaking ‘24 hours of Happy’, the joyful and engaging ad opens with the punchy narrative, “Don’t dance to someone else’s tune, write your own lyrics.”

Vicki Maguire, Deputy Executive Creative Director at Grey London, says: “No direction. No rehearsal. Our kids went through our playlist and just started busting moves all over the playground. We kept the camera running for 20 minutes. There’s no better advertisement for life on 4G with Spotify than music that moves you. Power to them.”

Lily Donagh, Interim Brand Director at Vodafone UK, adds: “Customers are using mobile devices in more ways than ever before and demand more from their network. We’ve made it our business to enhance our 4G experience, by giving customers access to the best entertainment services, such as Spotify Premium when they are on the go.”

The campaign will incorporate TV including spots during Britain’s Got Talent finals week, OOH including the Sound Shower at Westfield White City, behind the scenes content on social media and online.

Grey London was appointed to the Vodafone UK roster in March 2014 before being named lead creative agency (following a closed pitch against RKCR/Y&R) in February 2015. The agency also works with Vodafone Ireland (since 2011) and Vodafone Global (since 2013).

We Are From LA