Trends and Insight 871 Add to collection 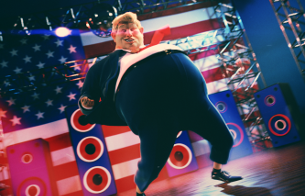 In those halcyon days before Trump’s stunning victory in the Presidential Election, the Romanian Production Company FrameBreed took a step into what we all thought to be an alternative reality where the billionaire mogul emerged victorious. Addressing his nation, an animated Trump offers up an extravagant and self-indulgent rap, all while getting his groove on and pulling some of his trademark facial expressions, wonderfully realised by director Bad History. But how is the video seen now that President Donald Trump is a reality?

LBB> Well, first things first- did you ever entertain the thought that Trump could actually win when you made this video?!

BH> We are not US based, we’re from Romania and our media was bombarded with the US presidential campaign. The subject was intriguing and we came out with the premise of our video: “what if Trump wins”? Little did we know that this was going to happen, of course!

LBB> The animation is very disquieting and made us feel quite uncomfortable! How did you capture that feeling?

BH> The initial intent was to create an animated caricature of Trump and how he was portrayed by the mainstream media with the help of local animation studio FrameBreed. The direction was to go for exaggerated poses, disregarding some aspects of motion and anatomy. I think the unsettling element comes as a result of multiple factors that are building the uncanny depiction of the real character. Of course, we had little time for this project, less than a month, so we had to compromise on many levels.

LBB> How do you think this video is going to be viewed in light of the fact that Trump actually won?

BH> I think the common viewer will say “hah, this actually happened! How did they know?” or will share it as a joke with their friends, describing in a funny manner the turn of events. Or, they will hate it, for the obvious reasons.

LBB> What was the initial reaction to this video (before he won!)?

BH> People viewed it more as a song than an animated short, everyone was booing the music and some of them insinuated fat shaming. And, of course, because it’s politics, there’s a lot of hatred. This didn’t bother us; we think it’s great that it generated strong reactions. Also, stats showed a lot of activity in the Mexico area, people were sharing and tagging each other on Facebook.

LBB> What was the trickiest part of making this video and how did you overcome it?

BH> We had very short time to work and the constant flow of material that the real Trump was constantly fuelling was overwhelming.

BH> Yes, we’re planning to release more shorts with different figures from present and past, tangled with controversy that the media surrounded them. I think there are people that might be interested and we encourage them to follow our channel.