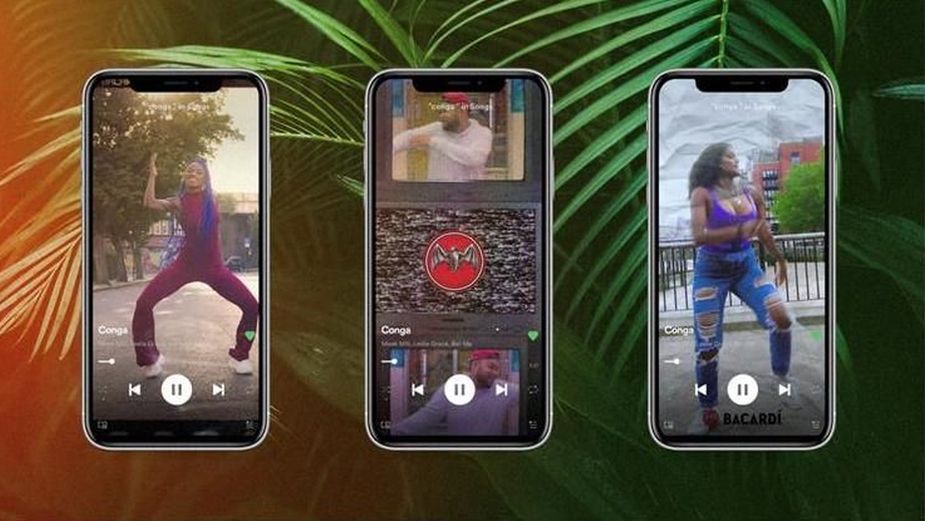 BACARDĺ Rum has announced a recent clever 'hack' of the new, shareable Spotify Canvas video function for the world’s most awarded rum brand’s latest 'Conga' track, featuring Meek Mill, Leslie Grace, produced by Boi-1da. Originally by Miami Sound Machine, the reimagined 'Conga' track from BACARDÍ and this cast of collaborators is the first and only official remake of the iconic Latin dance classic in 30 years.

Working in tandem with Sony Music Latin and BBDO New York, BACARDĺ is rewarding fans’ self-expression and channeling their collective energy in the latest social hijack by showcasing some of the best UGC and influencer dance videos, plus some never-before-seen submissions, through the Spotify Canvas function. Typically reserved as a platform for artists to engage with listeners, BACARDĺ is helping fans that submitted UGC dance moves for 'Conga' to make this moment of fame a reality by giving them the chance to see themselves onscreen through the Spotify Canvas function.

The UGC was collected during the first phase of the 'Conga Feat. You' campaign that launched in November 2020, with select consumer and influencer submissions being incorporated into the official “Conga” music video that premiered in January 2021. This content is now getting new life as repurposed and recut eight-second looping video montages, which first dropped through the Spotify Canvas function on World Music Day on June 21.

Mirroring the look and feel of the official music video and exclusively available for viewing when the “Conga” track is streamed on the Spotify mobile app, the second and third montages premiered around Fourth of July weekend and National Mojito Day on July 11, with the latter currently live for viewing. Featuring dance moves from the likes of influencers @itsjustnife, @arthinachiappan, and @itspac_, the Spotify Canvas montage videos not only give everyday people and influencers a level of star exposure on the app, it is intended to encourage BACARDĺ fans and followers to stream the track and official music video during any summertime celebration.