Baby Groot and GEICO's Gecko Team Up to Save You... Money 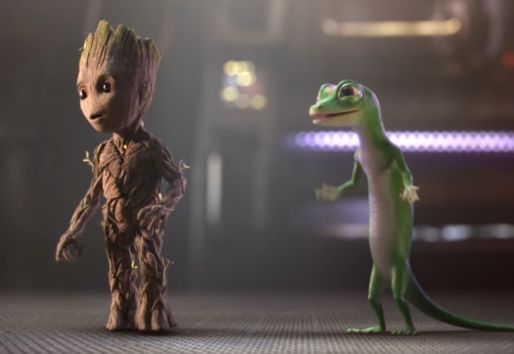 Not many companies have both of the world’s most loved pint sized icons in their stable and the rare opportunity to bring both of their Super Featherweight legends together to make cinematic history. In this commercial Guardians of the Galaxy's Baby Groot teams up with the GEICO Gecko to help him on his journey to save people money.

"Occasionally we get the privilege to bring more than one together on screen at the same time. In this spot it feels a little bit like when Pacino and De Niro faced off in 'Heat'!" exclaims David Hulin, Director of Animation.

The Martin Agency and GEICO came to Framestore's Hulin and the animation team for their decade of experience working with the GEICO Gecko as well as the relationship with Marvel Studios and Guardians of the Galaxy Vol. 2 to bring Groot to life.

Framestore’s seen more collaboration between their Integrated Advertising and Film teams recently. "It's really great to be able to produce work using our Framestore Pictures production department in LA for shooting the movie theatre scenes, our Gecko CG animation team in NY and the Groot CG film team in London," explains Hulin. "We shot, edited, animated and comped everything in house which meant we were able to maintain complete creative cohesion throughout the production of the spot."

Compositor Karch Coon also adds, "It was a huge effort from the compositing team. Using only reference stills and 2D assets we were able to build a convincing world for Groot and the Gecko to live in. With some incredible matte painting and by relighting LIDAR scans from on set we were able to art direct the plates to a level we've never done on a GEICO spot. And all from scratch!"

Coon continues, "With teams in London and New York we pushed our pipeline hard on this one. Adopting an ACES colour workflow the team was able keep the look consistent across many artists in two different countries."

The trickiest part of the process was designing the sequence inside the Marvel Cinematic Universe. It was based on a set from the movie but it was all seen from a very low camera perspective. "This design process required close collaboration as we were marrying live action elements, CG environment and matte painting throughout the production process," says Hulin. "As we art directed the layout and lighting in the plate the CG lighting had to change on the characters."

"The team really upped the level on this one," adds Coon. "Updating the textures, the rig, and building a custom lighting setup we were able to create a Gecko that holds his own next to an incredibly detailed Marvel character like Groot."

Hulin concludes, "Everyone involved worked extremely well together to make the spot look so amazing."