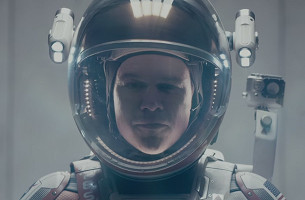 A unique promotion for Ridley Scott's highly anticipated new movie, The Martian starring Matt Damon, launches today to tease the movie's release on October 2nd. The promotion prominently features sports performance brand and Droga5 client Under Armour. The short film found here is the result of a unique collaboration between Droga5, WME, Under Armour, RSA and 3AM.

The 60-second film "Leave Your Mark" depicts a future where mankind has traveled to Mars, establishing a rich emotional backstory for the stars of The Martian - the Ares 3 crew, and follows the events of the mission’s disaster with a sense of urgency as the world watches the story unfold.

The film takes viewers 15 years into the future to 2030, imagining how astronauts at that time would naturally be treated like sports stars. As such, Matt Damon’s character, Mark Watney, is seen training and at the peak of physical fitness, wearing Under Armour products throughout the film, shot by RSA. In this scenario, Under Armour, who is always at the forefront of physical achievement, is established as “Official Training Partner of the Ares Program,” the space program which Mark Watney is a member of.

The goal of the series is to not only promote The Martian, but to bring the audience into this futuristic world with authenticity. The unique promotion came to fruition after WME and Droga5 collaborated to create an idea that would be mutually beneficial to their respective clients. This project signifies the access that WME has to talent and entertainment properties, coupled with Droga5's access and relationships with the brands the agency manages. The partnership led to a seamless solution for a branded entertainment integration.