AvL Gets Away With Anything in New Audi Campaign 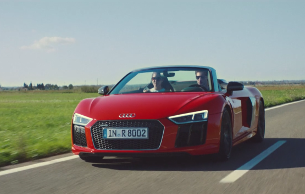 The Berlin-based agency Aimaq von Lobenstein (AvL) has shot an approximately two-minute short film with a cinematic feel for Audi. The film features a thrilling pursuit as well as and Audi select, an innovative mobility offer from the automotive brand.

Audi select is aimed at customers looking for more freedom and flexibility in their choice and use of vehicle: customers can choose and drive up to three different Audi models a year from a premium pool of attractive second-hand vehicles. A Ducati can also be included in the programme on request.

The film and the concept originate from the Aimaq von Lobenstein (AvL) agency, which is working with Audi for the first time.

During the film, two cops are on the trail of a master thief, who is almost impossible to capture. They investigate amongst associates of the suspect, questioning three women one after the other. Whilst the women state themselves to be clueless, the viewer learns from flashbacks that they actually know precisely what happened. They maintain their silence to the cops, only responding truthfully to the question of the type of car the charming master thief drove: because each time he drove a different Audi model... Hard to grasp. 12 months. 3 Audis. 1 Ducati. Audi select.

André Aimaq,Co-Founder and ECD, at Aimaq von Lobenstein said: "Working with Audi is a great honour for us. The fact that we were able to present the Audi select offer as an exciting story makes us all the happier."

The film will be shown throughout Germany as a cinema ad as well as online from 22/02/2017. In addition, diverse digital formats are planned, including social media channels such as Facebook, Instagram and YouTube.