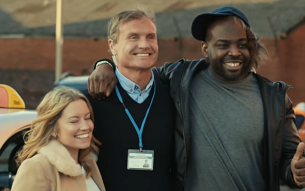 Having launched on 31 December 2016, the high profile ‘Good Thinking’ campaign has been developed in conjunction with Adam&EveDDB and ZenithOptimedia. It combines TV advertising, media relations and social and digital content.

Viewers will see the new advert trailed on social media from 31 December 2016 and on mainstream TV channels from 1 January 2017. David Coulthard - an ambassador for road safety in his native Scotland - is disguised as a rogue taxi driver who bewilders his unwitting passengers with an array of appalling driving habits.

The customers are then shocked as their driver demands payment for the hair-raising ride, before the driver’s real identity is revealed. The underlying message from Aviva is that no-one should have to pay for other people’s bad driving, and that safer drivers save an average of £170 by downloading and using the free Aviva Drive app*.

This is the latest in Aviva’s series of ‘safer driving’ activities, which started in December 2015 with a prominent campaign in which the Joliffe-Austin family challenged one another to find the safest driver, using the app.

Other Aviva initiatives have included a series of video ‘shorts’ featuring household names such as Tinchy Stryder and The Chuckle Brothers, made in conjunction with Channel 4, and more recently, a powerful affiliation with Buzzfeed, where drivers and passengers recount the traumas of being involved in a motor collision when the driver was distracted behind the wheel. Aviva also sponsored Brake charity’s Road Safety Week in November 2016.

Peter Markey, Brand and Marketing Communications Director for Aviva says: “We have been on a journey throughout 2016 to make people wake up and think about their driving behaviours. Distracted driving is a huge problem in the UK and Aviva is on a mission to help bring about social change and encourage people to really make that extra effort to concentrate when they are behind the wheel.

“Sadly there are still too many incidents which happen because people get into bad habits or they get distracted while driving, so we want to send out this message loud and clear - that everyone can play their part in making our roads safer, by just taking that extra care. The Aviva Drive app is free to download and safer drivers save an average of £170 off their Aviva car insurance, so there’s every reason to take the safe driving challenge and really make a difference.”