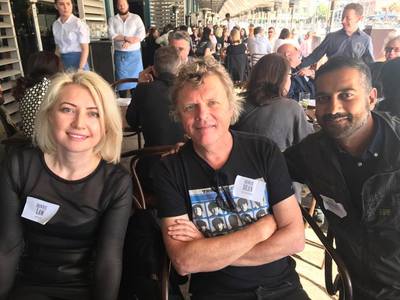 In the lead-up to the AWARD Awards the CB/LIA Legendary Lunch was held today at Kingsleys on Woolloomooloo Wharf in Sydney.

The lunch - which was attended by Australia's top creative directors and selected production company executive producers - was generously sponsored by New York-based Barbara Levy,  president of the London International Awards,

who is visiting Sydney to catch up with top creative directors and to attend the AWARD Awards.
Says Levy (left): "LIA is both proud and honoured to be co-hosting the LIA/CB Legendary Lunch during AWARD week in Sydney.  Over the years, LIA has had a front row seat in watching the Australian advertising community grow to become a Top 3 global powerhouse.

"Co-hosting is our way of giving thanks to those who have supported us throughout the years. It is a privilege for LIA to be part of this event, a way of showing the respect and admiration we have for the creatives who have led the way. What better time and place to do this than during AWARD week when the Australian creative community celebrates its achievements within this great industry."

In 2017, LIA will continue its Creative LIAisons programme that runs concurrent with the Judging in October in Las Vegas. Creative LIAisons was launched in 2012 as a way of giving back to the industry, targeted to Young Creatives from around the globe. LIA coordinates 4 days of educational and enriching seminars, lunches and dinners filled with stimulating discussions centered on the experiences and ideas of the speakers in their respective fields.

"The entire initiative, including travel, meals and hotel expenses, is fully funded by LIA.One young Aussie and one young Kiwi creative will be chosen later in the year to attend this educational and thought-inspiring event."