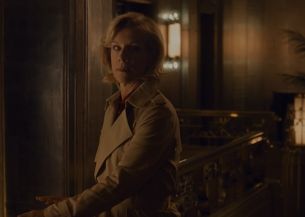 The integrated campaign launches tomorrow (Saturday 1st October). It is spearheaded by two national TV spots which sees both actors beckon the audience closer, speaking intimately, direct to camera, as if sharing a secret with the viewer.

The campaign stresses the intimacy of one-on-one storytelling emphasising its unique, compelling power to draw the listener in.

The actors harness the thespian richness of their voices to appeal to the viewer, asking hypnotically: “What’s more powerful than a voice in your ear?”. They go on to extol the power of the spoken word and how audio entertainment can transport the listener to another world.

In the 30 second spot starring Juliet Stevenson, the Olivier award-winning actress beckons the viewer closer to her and as the camera zooms in, she compellingly demonstrates how “a voice can make you imagine almost anything”.

In the 30 second spot starring two-time BIFA Award winning actor Eddie Marsan, the actor speaks in a hushed, intimate way reminiscent of audio storytelling. He reminds the viewer of the undeniable power of audio and how it brings your imagination to life. “A voice can conjure almost anything… From a diamond the size of an iceberg… to an elephant living in a tin can”. Both spots end with the strapline: “Feel every word”.

In 2013, Audible Studios won a Grammy Award for its production of Janis Ian’s memoir Society’s Child; that same year the studio also won Audie’s Audiobook of the Year for Colin Firth’s performance of Graham Greene’s The End of the Affair.

Fold7’s Dan Fryer and Gate Lambert handled the art direction and copywriting and it was directed by Mark Jenkinson through Rogue Films.

Simon Learman, Executive Creative Director, Fold7, says: “These films demonstrate both the highly intimate, visceral nature of the Audible experience and the power of the voice in charging our imagination and making us feel every word.”