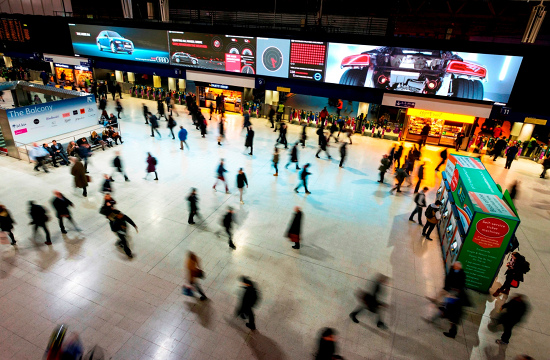 Audi is to be the launch partner of Waterloo Motion, the UK’s largest indoor advertising screen, which goes live for the very first time at London’s Waterloo railway station on 10 February 2014.

Waterloo Motion is a powerful new communication channel at the UK’s busiest station, delivering a captive audience of four million commuters every fortnight. Part of JCDecaux and Network Rail’s vision for the future of rail advertising, it consists of a state-of-the-art, 40 x 3 metre, 6mm pixel, high-definition screen spanning the length of the concourse.

It will launch with the Audi Dashboard, a creative concept featuring branded content developed specifically for the Waterloo Motion site by ad agency BBH London and produced by Grand Visual. The Audi Dashboard features live statistics and contextual messages about “One day in the life of Waterloo” – a series of quirky station facts which are compared to the Audi range. For example: “31,451 cups of coffee bought. If this was petrol, you could drive an Audi A3 Sportback to the moon.”

The dashboard will also offer genuinely useful, real-time information, including how many seats are available on trains departing from Waterloo.  This and all other statistics will refresh every two minutes to keep the audience engaged especially during long waits.  Additionally, a Twitter feed from #AudiWaterloo will keep commuters entertained and allow them to participate in the conversation on-screen.

Kristian Dean, National Communications Manager at Audi UK, says:  “The Audi brand is always progressive so it makes sense to be the first advertiser on the exciting new Waterloo Motion site. The combination of a strong ABC1 audience and an average dwell time of 17 minutes gives us a great opportunity to communicate key brand messages to the right people.”

Spencer Berwin, Managing Director of Sales at JCDecaux UK, says: “It is fantastic that Audi has chosen to be our partner for the launch of Waterloo Motion, which marks a new era in rail advertising, underlining the importance of rail as an environment for brands and the ability of digital to create powerful, immersive experiences that engage millions of consumers.”

“For Audi, it is important we use opportunities to support the brand’s ‘Vorsprung durch Technik’ philosophy. The challenge with Waterloo Motion is to keep such a vast audience engaged for the campaign period. As a result, we came up with a dynamic concept where the data on the Audi Dashboard is never the same twice,” add Matt Doman and Ian Heartfield, Creative Directors at BBH London,

The campaign was planned by MediaCom, delivered by JCDecaux and bought by Kinetic. The Audi Dashboard was created and designed by BBH London with digital production by Grand Visual. Data analysis and visualisation was provided by Information is Beautiful.  All dynamic content and live feeds are managed through OpenLoop and pushed live to the Waterloo Motion. 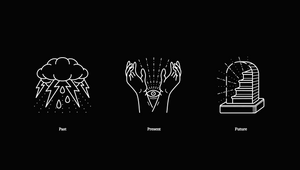