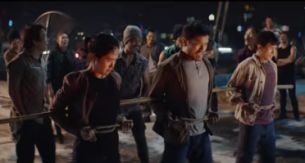 A major Audi campaign showcases the amazing brains of the recently launched models, Audi A6, A7 and A8. The ad highlights the luxury interior technologies of the A8 ... with a little help from an all-action martial-arts expert and iconic funk / soul band, The Commodores.
Created by BBH London, the exciting and witty film, Escape, starts out as a spectacular battle between two rival gangs. Our hero escapes the clutches of a henchman and hides in the back seat of a nearby A8. Here, he becomes captivated by the luxuries and state of the art technologies within.
As chaos reigns outside, our hero puts his feet up and relaxes in the passenger seat of the car. He even enjoys a foot massage, as Easy by Commodores, featuring Lionel Ritchie, plays soulfully from the stereo. Eventually, he rejoins the fight to help his captured partner.
The light-hearted scene demonstrates how Audi technologies can make you feel safe, calm and in control, even in the most chaotic situations and testing of environments.
The film was shot in Thailand’s Bangkok, directed by the Dutch filmmaker Matthijs Van Heijningen.  Its thrilling fight sequences were coordinated by Seng Kawee, who has choreographed martial-arts scenes in James Bond films.
Benjamin Braun, Marketing Director of Audi UK, says: “Escape is the first of three major TV campaigns for the brand for the next couple of months. In true Audi style, it tells a story. This time the narrative is about our seriously luxurious technology.  No matter how chaotic the outside world, Audi cars provide an ‘escape’.  Our technology keeps you safe and supremely comfortable. The A8 can include widescreen TVs, 23 loudspeakers, a fridge and even a foot massage for passengers in the back.”
Ian Heartfield, Executive Creative Director of BBH London, adds: "The film focuses on the technology story from inside an Audi, with the help of two martial-arts gangs and the voice of Lionel Ritchie.”
The film’s director, Matthijs Van Heijnigen, adds: “The project is a visual spectacle, has a huge martial-arts fighting scene and an Audi A8 as the only way for our hero to escape.  It’s spectacular, funny and highlights the luxurious features of the Audi A8.”
Escape will make its television debut on 16 August 2018 with spots in high profile programming, such as the Chelsea vs Arsenal premier league match and ITV’s broadcast of Jurassic World and Lord of the Rings:  Two Towers – all airing this weekend (18 August).
Additionally, the ad will be shown in cinemas as part of a BFI partnership from 21 August and be supported with VOD.  The campaign was planned and bought by Omnicom Media Group’s PHD.
view more - Creative

Head of Strategy: Will Lion