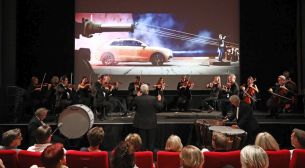 The arrival of the new Audi Q8 is announced in a spectacular major campaign – Big Entrance.

The TV ad’s premiere was accompanied by a live 16-piece orchestra and 40-strong choir at the BFI Southbank in London.

Created by BBH London, Big Entrance shows the 100-strong Odessa Philharmonic Orchestra tuning up in the dead of night beside a shipping dock. As the Q8 rolls out of a container, the orchestra breaks into the epic swoon of Verdi's Dies Irae. It is a rousing reception fit for the latest premium SUV from Audi.

The atmospheric ad brims with pomp and ceremony, but there is also a splash of trademark Audi humour: as the Q8 carefully navigates its way through a tight spot near the percussionist, the orchestra momentarily grinds to a halt – the players are stunned by the Q8's power and elegance.

A witty tagline reads: The new Audi Q8. It makes a bit of an entrance

The special screening of Big Entrance was streamed via Periscope and Twitter.

An audience of more than 440 Audi guests and BFI members was then treated to an exclusive screening of the upcoming heist caper American Animals, one of the most eagerly anticipated movies of the year. Meanwhile, a fleet of Q8s was displayed on a walkway by South Bank in all its glory.

The ad was filmed at the Odessa Port, Ukraine, and directed by Sam Brown.

Benjamin Braun, Marketing Director of Audi UK, says, "The latest SUV from Audi, the Q8, is distinctively bold, beautiful and packed with new technology. It deserved a spectacular unveil in the UK, it got one with a 40-strong philharmonic choir. Verdi’s ‘sturm und drang’ (storm and drive) was the perfect soundtrack to the latest incarnation of our philosophy of ‘Vorsprung durch Technik’".

Director Sam Brown says, "We wanted to characterise the Q8 as a commanding presence, deserving of great reverence and fanfare. Big Entrance achieves that, all the while maintaining the distinct Audi tone, identity, intelligence and wit".

Big Entrance will make its television debut on 3 September, running across Channel 4, ITV and selected Sky channels. It will be supported across VOD, out of home, radio and cinema.

The new Audi campaign will be among the first to show on The Kensington - the first billboard by Zaha Hadid Design. This landmark advertising structure, commissioned by JCDecaux on London’s West Cromwell Road, integrates public art, contemporary design and digital media. Its stainless-steel looped ribbon structure expresses the dynamism of the advertised brand and an on-the-go audience.

The campaign was planned and bought by Omnicom Media Group's PHD, alongside PHD Fuse which was responsible for brokering and managing the special Audi screening with the BFI.

Social media and live stream were managed by We Are Social and Streaming Tank.