Spots directed by Sam Pilling & D.A.R.Y.L see the RS 3 Sportback duke it out with a speedboat & ice hockey team 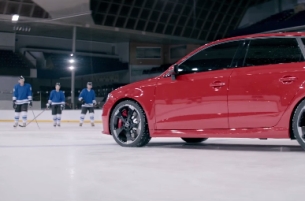 A multi-million pound campaign adopts a new creative approach for Audi - the major TV commercial for the RS 3 Sportback, created by BBH, will be supported by three short films on audi.co.uk to achieve maximum exposure.

The 30-second TV ad, which will break on Sunday 14 June during England’s Euro 2016 qualifier versus Slovenia (ITV), features the latest addition to the high-performance Audi RS range. It encapsulates the restless nature of the car, showing the RS 3 literally bursting free of its restraints in hunt of adventure. The ad stops short of revealing what the car does next and instead encourages viewers to ‘see it unleashed’ by searching ‘RS3’.

Viewers will then be directed to two sites, audi.co.uk and youtube.com/user/AudiChannel, which are home to three short films showcasing the RS 3 in different thrilling challenges - Rally, Speedboat and Ice Hockey. ‘Rally’ shows the exuberant RS 3 Sportback meeting its hero, the legendary 1983 Audi Sport quattro on a rally course which winds through a densely packed forest to the accompaniment of the RS 3’s throaty roar.

‘Speedboat’ and ‘Ice Hockey’ sees the irrepressible RS 3 Sportback take on a speedboat through deep water on a causeway and playfully gatecrash an ice hockey training session.

The campaign is being supported by social activity that sees Audi become the first premium automotive brand in the UK to implement Instagram’s new targeted carousel format. The platform will be used to tell the story of each leg of the restless journey, linking back to YouTube where viewers can watch full length video content.

Nick Ratcliffe, Head of Marketing for Audi UK, says: “Motorsport is in the Audi genes, and the new Audi RS 3 Sportback is the latest manifestation of that as well as our famous philosophy of ‘Vorsprung durch Technik’ - advancement through technology. This campaign reflects its ebullient character, giving the viewer a tantalising taste of the world of RS 3. The beautifully created, arresting films perfectly capture the turbo-charged thrill of being behind its wheel."

Ian Heartfield, Creative Director for BBH, who created and produced the campaign, adds: "We did what we thought a crazily powerful, restless little sports car would want to do.  We saw it live up to its reputation on a rally stage, we mastered an ice rink and we went deeper into the sea than we really should have done - all to make a set of energetic and impressive films."

This is the second time in one month that Audi has hit our screens with a new ad. It follows the Hollywood-style R8 / RS 3 ‘Birth’ ad, which featured during half time of the 2015 Champions League Final.