Audi Marks Presidential Debates with This Blockbuster of a Spot 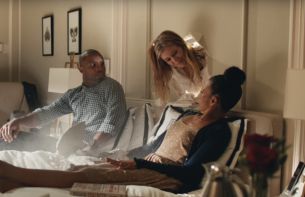 ‘Duel’, a 90-second spot created by Venables Bell & Partners, opens on two filthy and exhausted individuals stood in the middle of a wrecked banquet table. What follows is a real blockbuster beauty of a spot, directed by Rattling Stick’s Ringan Ledwidge with post production by The Mill. But revealing the narrative would be to give away the fun, so check out the spot below.

The ad ends with the message, “Beautiful things are worth fighting for. Choose the next driver wisely.” It’s a sentiment with a nod to the political discourse it’s involved in, but suitably open so as not to sway either side.

The spot will air during all three presidential debates (the first of which kicked off last night).