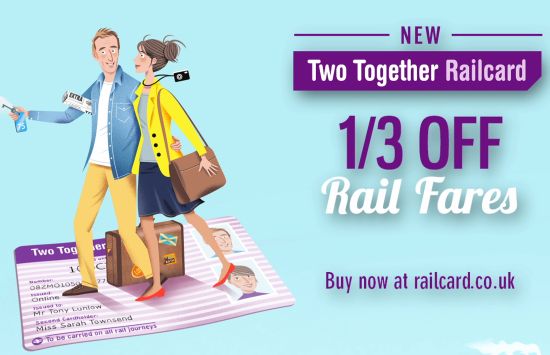 The Association of Train Operating Companies (ATOC), which represents train operators, and The Red Brick Road have launched an exciting new integrated campaign, introducing the first new national Railcard to Britain in a generation. The campaign will spread awareness of the new Two Together Railcard, reinforcing the benefits and opportunities of receiving a third  off most adult rail fares when travelling with a named companion.

Created by Baz Williamson and Jess Little, the campaign will launch on Monday 31st March with a 30” TV spot (the first ever for Railcards since rail privatization), national press and digital activity, followed by two 30” radio spots in April.

The TV ad was directed by Shay Hamias, animation and illustrations by th1ng and additional illustrations from Ben Kirchner. The charming and upbeat spot follows the travels of two people as they discover the length and breadth of Britain with their Two Together Railcard. It develops the existing ‘Magic Railcard’ print creative, also illustrated by Ben Kirchner, which currently promotes the 16-25, Family & Friends and Senior Railcards. And, like the other Railcards, the Two Together Railcard positions itself as the enabler of good times and experiences as a result of savings on rail fares for a mere £30 annual upfront cost.

Andrew Robertson, Head of Marketing at ATOC said: “Railcards are a fantastic value proposition for rail travellers. We’re thrilled to be launching the first new Railcard for a generation.”

David Miller, Managing Director at The Red Brick Road said: “We are excited to launch this new campaign which will not only create awareness of the new Railcard but will also inspire a new audience to discover Britain by train.”