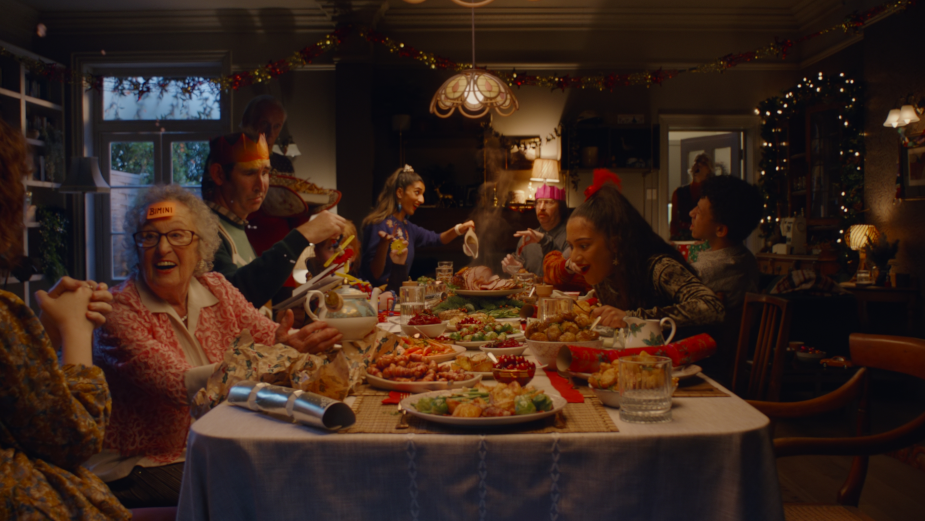 Sainsbury’s much anticipated Christmas advert ‘A Christmas to Savour’ aired for the first time this evening on ITV Networks during the Angela Black Special and online on YouTube.

With last Christmas not being quite as expected, this year’s ad celebrates the enjoyment of friends and family coming together and encourages everyone to savour every precious, delicious moment.

To tell this year’s story, Sainsbury’s immerses viewers in a single moment, creating a rich and sentimental snapshot of a classic Christmas. By travelling through and experiencing every detail of the scene, viewers see elements of a familiar Christmas, but from a new perspective.

The advert opens with someone plugging in Christmas tree lights, with the words ‘Welcome Back to Christmas’ appearing on the screen, before the fairy lights illuminate and everyone and everything freezes.

A toy stops in the air mid backflip, and you hear Etta James’ classic voice coming in before the camera pans around the room to show different loved ones frozen in time.

A Grandpa is sat in his chair cracking open a nut which has exploded everywhere. Children are playing with cheeky grins on their faces as the scene then pans arounds to a mouth-watering Taste the Difference Chicken Waffle. A woman then opens a bottle of Sainsbury's Christmas Prosecco Rosé and we see it spraying in the air. Through a bubble of fizz viewers are then greeted by scenes of loved ones sitting around the dinner table about to tuck in. First up is Grandma with a post-it-note on her head, with the name Bimini (Bon Boulash), from RuPaul’s Drag Race, playing a Christmas game of ‘Who Am I?’. She’s confused as, unlike her grandchildren, she doesn’t know who that is. The camera passes by to show a whole host of food including a delicious Taste the Difference Maple & Marmalade Gammon.

Underneath the table we see children holding a Taste the Difference Salted Caramel & Chocolate Star, with one child seemingly forgetting to freeze and enjoying a roast potato instead. Then bringing the focus onto two men at the piano mid song, appearing full of happiness and laughter.

Finally, the camera zooms out to show the whole room, which is full of joy. A dog that is mid jump falls to the floor and with that, the scene resumes. The gravy pours, the cracker cracks and the fizz sprays. Over the soundtrack, Etta James’ ‘At Last’, laughter and chatter can be heard once more.

The words ‘A Christmas to Savour’ appear on the screen, with Stephen Fry’s voiceover proclaiming: “It’s been a long time coming, so let’s make it a Christmas to savour”.

Radha Davies, director of brand communications and Creative, at Sainsbury’s says: “With so many of us unable to spend Christmas with our loved one’s last year we, along with the nation, are really excited to fully celebrate Christmas once more. One of the true highlights of the festive season is the much-anticipated Christmas dinner. Whilst the food is important, it’s also about what that meal represents, spending quality time with loved ones, catching up, enjoying a delicious meal and above all, having fun together.

“That’s why we decided to focus on savouring every moment with this year’s ad. We really hope everyone truly gets to enjoy themselves this year and can make it one to remember.”

This year’s advert was created by global advertising agency, Wieden+Kennedy. The 60 second TVC launched for the first time during the Angela Black Special break on ITV Networks on Sunday 14th November. It launches in cinemas on 22nd November, with a 20 second cut also shown across TV and on social media.